It is with a mixture of sorrow, hope and wonder that I share with you the news that Karma, our beautiful Red-tailed Hawk, ambassador and friend, took off during his flight session on Thursday, November 5. There has been no sight or sign of him since, despite exhaustive and extensive searching. I have come to believe that Karma cast his fate to the wind, chose freedom, and took off. Heres the story as best I can tell it. 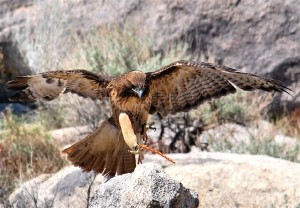 It was clear and breezy that morning when Kristina Hazard and I took him up the trail that runs along the foot of the mountains just north of the Center at Keoughs. Karma had come to love the wind, always flying eagerly, learning to use the wind in his daily flights. Those times when the wind became too strong, we would bring him back to his flight cage.

Karma made one short flight that morning, flying off the glove to a boulder about 15 feet away. The local pair of adult Red-tails, who have been checking out Karma periodically for the past year, were soaring just above him and a juvenile Red-tail flew in, landing just a few feet away from him on a nearby boulder. (That same young hawk had visited Karma the day before, approaching him closely while the adults were circling overhead.) We could hear the young bird and Karma vocalizing back and forth, both using the same baby hunger call that Karma uses to signal his eagerness to go flying or in anticipation of an extra feeding.

Kristi whistled and threw the lure. As Karma took off the wind strengthened. He flew down to the lure but veered off instead of landing. He flew toward a couple of his favorite boulder landing sites, the wind behind him, but veered off again. Traveling another 10 feet or so, he passed between a rock outcrop and a large boulder. He turned into the wind and, wings spread, went into a landing stall and dropped toward the ground, feet down. His downward path took him behind the outcrop; when I lost sight of him, Karma was in perfect landing form about 4 feet above the ground about 20 feet away. I am sure that he touched down.

Whistling once, we waited a beat to see if he would jump up on a rock as he usually did, then because the strong wind continued, we hurried toward him. Kristi was on the north side of the outcrop, I was on the right. It was only 2-3 minutes after we last saw him when we reached the landing site. Karma was nowhere to be seen.

We looked around the trough that rises northward toward the canyon mouth and saw no sign of him, either flying, on a rock or on the ground. We spread out, took a heading with the wind behind us, and moved across to the rise on the far side. Topping the rise, we still saw no sign of Karma. Moving on another 500 yards or more, we scoured the ground, looking for any sign of movement with no success.

Kristi went on, following the winds path. I returned to the Center where I called Janice Meredith, who trained Karma in falconry techniques, and Linda Baptie, who lives just 5 minutes away in Wilkerson. I gathered up binoculars, whistles, and the lure, and returned to the search. Norm Milleron, a Keoughs resident who was out walking in the area joined us.

Starting at the point where Karma disappeared, we moved out. Janice had her dogs; they are trained to help find her falconry birds. We looked for Karma on the ground, in bushes and crevices, on boulders, flying. We scanned rock faces, brush, depressions in the earth. The wind continued to blow steady and strong.

Thursdays search continued for 6 hours; Skandar Reid came to help late in the afternoon; after dark, with headlamp and flashlight, I made another intensive hour-long search of about 3000 square feet where Karma was last seen.

Each morning, and at intervals during the day, we walk out into the desert, swing the lure and whistle for Karma with no response. Falconry birds sometimes take off, as Karma did. In Janices experience, these birds will eventually return, but the longest any bird was gone was a week.

On Friday, the same searchers, joined by Jenny Nyffenegger and Kathy Varnum, made a second sweep of the areas covered the day before. The juvenile Red-tail was seen high on the ridge above the canyon mouth and the pair of adults were flying in the vicinity. I called the radio stations and asked for their help; asked that they let people know Karma was lost and what to look for.

We traveled eastward in the afternoon (Susie Goss joined us) along the hot ditch system and old county road toward Wilkerson and on into the south end of Wilkerson. Janice covered the shoulders and trees along Highway 395 and north and south on Collins Road. We stopped often, swinging the lure and calling with the whistle. Still no sign of Karma.

Saturday morning found me, Kristi, Linda, Norm and Eva Poole-Gilson sweeping southward from the end of Quail Lane in old Wilkerson over saddles and valleys until we reached the original search area, extended that to the north and east, and then back to Keoughs. In the late afternoon, Jett Chapman, his friend Jennifer, Kathy Duvall and I entered the canyon just north of the trail from Keoughs. A two-hour search revealed no sign; it soon grew dim and we left off the search.

Sunday morning, Kristi, Susie, Kathy D., Dimitri Barton, and Ron and Nancy Overholtz searched the canyon intensively, using binoculars, whistles, and the lure. They found no signs; no feathers, droppings, body. The adult pair and the juvenile Red-tail were soaring above the canyon. The young one landed often on the outcrop of granite boulders topping the north rim. But Karma could not be seen.

By Monday, approximately 2 square miles were searched; more than half of that was yard by yard on foot. Linda and Art Lillund covered or re-covered some smaller areas that might have been missed or under-searched. Nothing. To move out still farther became impossible without any clue as to direction.

Where is Karma? Is he dead? Injured? Starving? Has he hunted successfully? Is he alive? Is he up there on the canyon rim with the other Red-tails? We dont know the answer to these questionsand may never know.

Sorrow, hope and wonderall these feelings flow through me. Karmas physical presence leaves an empty space at the Center; his absence is a sorrow and loss for all.

But I am filled with wonder that this beautiful bird, who suffered so severely, who was traumatized and confused for the first year he was with us, had become so strong and vibrant. I feel wonder and awe that he made a quantum leap forward, choosing the wind and freedom over the security of a captive life.

And hope lightens my sorrow. If he had not been robbed of his natural wild life, Karma would have fledged, left his nest and begun learning the skills that a winged predator needs to survive. I hope that he is meeting that challenge now.

I imagine Karma flying free. I see him with his new companions, trying his hunting skills, strengthening his wings, living the wild life that was his birthright. I dont know if he is alive; I dont know how long he will survive. What I do know is that he took control of his life and opted for freedom. What an incredible moment! What a difficult path Karma followed to get to that moment! What joy and amazement he brought to me and everyone who saw and knew him. What a gift Karma was and will always.

In my story, in my heart, in my mind, Karma is flying the blue skies of the valley and mountains as a free and wild Red-tailed Hawk. Fly free, Karma! Fly free!