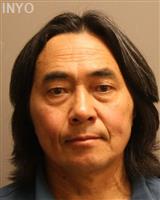 On December 22, 2017, Bishop resident Karl Chang was sentenced to serve 364 days in the Inyo County Jail as a term and condition of four years of formal felony probation following his admission of two counts of sexual battery by fraud.

Other similar counts had been dismissed as part of a negotiated disposition.  Mr. Chang will be required to register as a sex offender pursuant to Penal Code section 290, and will not be allowed to reside within 2000 feet of schools, parks, or other areas where young people congregate.

He will not be allowed to practice massage therapy or acupuncture therapy while on probation, and the State of California Acupuncture Board is investigating administrative action that could result in his loss of licensure.

Mr. Chang had engaged in an acupuncture and massage therapy business in Bishop.

Under the guise of treating certain medical conditions he admittedly engaged in illegal sexual touching and other inappropriate behavior.

Mr. Chang had previously been placed on probation to the State of California Acupuncture Board after having been accused of similar conduct.  Part of that probation included a requirement that he complete a “patient boundary” training class.

The fact that he continued his behavior after the intervention of his licensing authority and his completion of such a class significantly aggravated this case.

This case was originally investigated by the Bishop Police Department, and was prosecuted by Deputy District Attorney Dana Crom.

It sounds like Inyo County Jail is too tame of a place for this dirtbag.