At last report, a juvenile suspect was in custody on suspicion of starting a fire that destroyed three out-buildings and a non-operational vehicle Wednesday in Bishop. 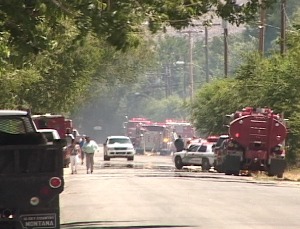 The fire began about 2 p.m. on the west side of South Pa Ha Lane, said Chief Ray Seguine of the Bishop Volunteer Fire Department. The initial report was a brush fire, but three outbuildings – two metal and one wood – were full engulfed when firefighters arrived on scene, Seguine said.

A large cottonwood tree and two other vehicles were damaged, according to Chief Seguine. A loader was used to down the tree. About one-half acre of vegetation was burned.

Firefighters quickly knocked down the flames, but a lengthy mop-up was necessary, Seguine said. About 20 firefighters, eight units and CalFire personnel were on scene, some until about 5:30 p.m. CHP and Inyo County Sheriff officers provided traffic control.

Damage was estimated to be as high as $2,000, Seguine said.  No information on the suspect was immediately available.

Luckily the fire fighters and local community members were quickly on the scene of this fire and had it out before the afternoon winds picked up (and they did)! Great job and many thanks to all who helped out!