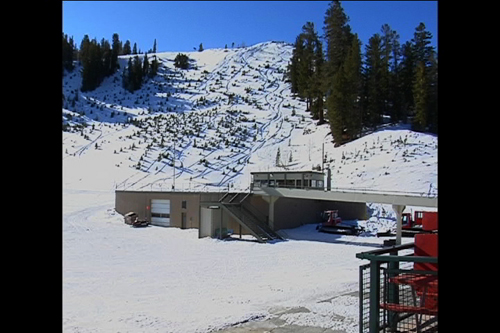 Mammoth Mountain Chief Operating Officer Greg Dallas and Chief Administrative Officer Ron Cohen personally went to the meeting with the news. This, in the face of some pretty rough days at June Mountain. One day saw no customers at all.

Supervisor Tim Alpers said the animation and kids programs that Mammoth Mountain carried out has made a difference. Alpers said Mono County will try to match Mammoth Mountain’s efforts with community development. He said it looks like a grant may be available toward plans for the June Lake downtown area.

Alpers said the idea would be to tie everything together – downtown, the Rodeo Grounds, and the Ski Area into one corridor. Ed Roski bought the Rodeo Grounds last year but has not announced any development plans so far. He had said earlier that he wanted to do something to please the community, County and stakeholders.

Meanwhile, the Mono Local Transportation Commission had earlier asked Yosemite about an early opening of Tioga Pass considering the severe lack of snow. Even before the latest snowfall, Park Superintendent Don Neubacher indicated snow conditions were not conducive to opening Tioga Road yet. After that, more snow fell. Officials will keep an eye on the pass road for the potential of an early opening.

The bottom line is that the resort owners know what the set cost are and snow pack records go back one hundred years or more, The built in equity to a world class resort area such as Mammoth Lakes and June Lakes is also fairly predictable. If the MMSA execs… Read more »

Rusty will save June and Mammoth, you wait and see 🙂

Trouble
Reply to  Jeff B

Jeff what’s the B stand for? Bother-In-Law?

Maybe it’s due to June having better conditions than Mammoth! Personally I hope the owners sell to someone with class!

I don’t want to sound heartless but who cares?
Many of us are lucky to keep food on the table and a roof over our heads in a drought year.

Um how about the people whose jobs are affected……waiters,cab drivers, hospital emergency room employees[yes they are cutting hours too] resort workers, motel owners, restaurant owners, the airlines that bring people here…..thats who cares. You dont care? Then stay away.

The original post was concerning investors, ie. Wall St. And indeed who does care about the top 10%. They’ve already got the money. They people you cite: waiters and other hourly workers are having a hard time all over the World. It not because Tinner doesn’t care about investors. It’s… Read more »