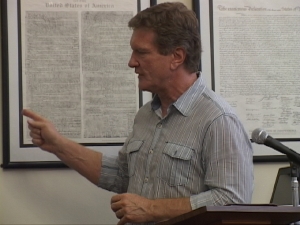 Earlier this month, Mammoth Mountain Administrative Officer, Ron Cohen, had said the company purchased new computers and new communication equipment for June Mountain and had gone to work on lifts and runs to get them ready for testing and certification prior to the re-opening of the Mountain this season. Cohen said the total investment in the past year adds up to around $1 million. Officials had said June Mountain will re-open December 13th, weather permitting.

Cohen said that this season Mammoth Mountain would take a “much stronger approach to marketing both ski areas.” He said new Chief Marketing Officer, Erik Forsell, has June Mountain on his short list of priorities.

Ski Area officials talk about an emphasis on family friendliness at June Mountain. Abigail Ross, at June Mountain, pointed to the new policy of kids 12 and under skiing for free and other special deals. Rusty Gregory will talk details at that community meeting tomorrow night, November 5th at 7pm at the June Lake Community Center.

And, on Wednesday, Gregory and CAO Ron Cohen will sit down with Mammoth Mayor Rick Wood, Councilwoman Jo Bacon and Town Manager Dan Holler for a meeting of the Ski Area/ Town of Mammoth Liaison Committee.

No new news. Just a lot of the same.A waste of time.

As any corporate person would do, Gregory is politely (albeit brutally) giving the poor chumps who insist their mountain is a huge revenue-maker, one last stand.

Only then can Gregory honestly tell the community – “At least I tried, g-damn it!”

Now I have no idea how the billboard game works. But the billboard down at Fort Independence advertising for Brianhead and its Utah “powder” shows how behind the eight ball Rusty is. Again. Those billboards should have been rented out by MMSA for the next 100 yrs. The billboard would… Read more »

Is this an example of his ‘stepping down’ as CEO? I thought he would’ve rode into the sunset by now.

Harsh Reality of the ski industry

It’s sad to me that the people of June Lake think enough revenue is generated from skiing at their mountain to support their community. The harsh, cold reality is, that as the economy continues on its not-much-growth ways, the Southern Californians who have any disposable income is demanding the amenities… Read more »

Mark
Reply to  Harsh Reality of the ski industry

Ski June while you can. The harsh reality of a mild winter and a bad economy will have June closed sooner then later.

So basically the puppet master will hold court with some of the clown touncil for more oohs and aahs….nice!

What’s Rusty got in his bag of tricks this time?