By News Staff on November 7, 2013 in Government Agencies/Utilities, Mammoth Mountain 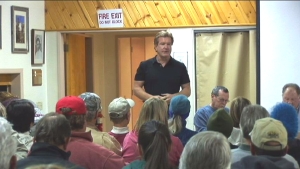 The last time Rusty Gregory stood before the June Lake Citizen Advisory Committee he had to deliver some extremely unfortunate news. However, at the meeting that took place on November 5th at 7pm in June Lake, the Mammoth Mountain CEO was in high spirits as he announced that June Mountain would open on December 13, 2013. In an hour and fifteen minute long presentation, that included a question and answer portion, Rusty would go on to submit a three point plan for June Mountain and introduce Mammoth’s reorganized Executive Management Team.

The presentation began with a slide that laid out the three point plan for June Mountain, point one being that the mountain would reopen for the 2013/14 Season. The other points are to “submit a project proposal for snowmaking expansion and a lift up the face in January of 2014,” and to, “work with the community to develop a plan to increase the number of transient units available in June Lake.” Mr. Gregory left the expansion of these points to the new management team at Mammoth Mountain who he assured, “would be involved and accountable to June Mountain.”  What Rusty does say is that, “Mammoth is not the best place for families.” He goes on to credit this to the fact that people visiting Mammoth ski fast and party hard.  With that in mind, they have decided to market June differently.

June Mountain, with the resources of the Mammoth Mountain Marketing Department, is targeting their advertising efforts to, “families with young children.” And the number one way they are doing this is by letting children 12 and under ski free all season long with absolutely no black out dates.  O’ to be young…sigh. Another way they plan on marketing to families is by bringing back June’s beloved mascot, Bucky, and integrating him with Woolly and friends. June Mountain will primarily be focusing on programs that will occupy a child’s whole day and bring the family together. The Mammoth Mountain Marketing Team hopes that they can change the perception in Southern California that June Mountain’s sole purpose is to accommodate Mammoth’s overflow.

While June may be marketed differently than Mammoth Mountain, the Executive Management Team made it clear that, “June Mountain is opening up with the full might and support of Mammoth Mountain Resources.” During the question and answer portion, the June crowd seemed relatively grateful to Rusty and the rest of the Mammoth Team and they certainly appeared excited about the prospect of reopening.  Many rumors were dispelled that night and Rusty Gregory assured those in attendance that the, “only way June closes is if we get no snow.”

-Opening Day at June Mountain is December 13 and tickets are just $10 with all proceeds going back into the community.

-June Mountain Passes will be valid at Mammoth Mountain after April 20, 2013.

Personally I like the Mammoths this way stickers. I get a real kick out of the directions.

wow,thats alot of whining for someone who makes money off of opinionated decals

no whining, just factual opinions for those like you that don’t have a clue about June Lake……I didn’t say I made money w/ those stickers…just enough to cover the cost of having them made.I was making a point to how popular they are. Freedom of speech is a bitch when… Read more »

In the last year I have sold over 1000 of those stickers. Im am hardly a tree hugger. When we came up with Don’t Mammoth June has nothing to w/ ski areas. Its a statement about a large corporation coming into a small town, twisting the arms of policy makers[perhaps… Read more »

You really do see the big picture. People like you are so rare.

The people here in Mammoth Lakes see the results of the rape by big developers every day and they still don’t get it. They even want more.

Keep up the good fight Tony.

The best that can be done is to wait and see. It isn’t any wonder that many are skeptical. I am hoping, as I said at the meeting, that locals will be able to participate in the “vision” making. That’s a good way to get people to buy in, which… Read more »

To costly? Mountain High, and Snow Summit pump water to the top of their mountains from the base.

your wrong- actually they both have snow making ponds That are refilled at a very slow pace via regular water lines[very low pressure]…Besides they do what it takes to make money….marketing,upgrades,deals,snow making…something June hasn’t really been doing too much of for the last 20 yrs. Google Earth it…see those little… Read more »

such garbage. the only way some people feel good is to misrepresent others. It’s a common affliction.

I was at the meeting. Everything that RG and his crew said was very positive. It was a little discomforting that Rusty did not allow the other speakers to take any questions, just Rusty took a limited amount of questions. The proof will be in his actions. Also, I for… Read more »

Have you ever heard the phrase “bite the hand that feeds you”?

Does Mammoth actually own enough water rights to expand snowmaking an any meaningful way?

The plan is in! Now to bring the overnight skiers in the lodging community, developers and current condo owner’s can look forward to doing more than just surviving… if that!

…and remove the “Don’t Mammoth June” sticker from your car.