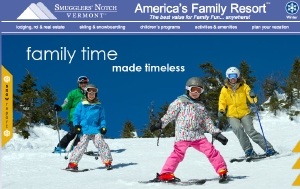 From Smuggler’s Notch in Vermont to Waterville Valley Resort in New Hampshire, a group of more than a dozen Mono County and Mammoth Mountain officials and June Lake businessmen continue to visit small ski areas and study their successes to help assure the future of June Mountain.

Mono Supervisor Larry Johnston, on a speaker phone with Economic Development officials Alicia Vennos and Jeff Simpson, talked to us from Vermont about the ambitious trip. They described Smuggler’s Notch Ski Area as sort of similar to June Mountain. Smugglers, they said, is very family oriented. The Mono group has met with presidents and managers of small ski areas, toured their facilities, checked out their amenities and lifts.

Supervisor Johnston said the Vermont resorts all have snow-making, which June Mountain does not. Said Johnston, “We’re learning a lot about what kind of operations here might fit for June Mountain.” Supervisor Johnston said for him it’s a “question of what we want June Mountain to be. We haven’t zeroed in on that yet.” He said he feels a lot of people like the family-oriented model. He called Smuggler’s pretty remarkable and very family oriented. Said Johnston, “They have easy access, good instruction and good access to child care.”

Bromley Resort nearby said summer months are the most profitable. They also cater to kids and families. In the summer, Bromley features water slides, zip lines, and trampolines. Supervisor Johnston said eighteen towns in the area have joined in a Chamber of Commerce which hosts lots of regional events for winter and summer. He likes the regional perspective.

The group headed to Waterville Valley Resort in New Hampshire Wednesday with plans to go to Okemo Mountain Resort back in Vermont. Supervisor Johnston said when the trip is over, all parties will come together with some concrete ideas to run by the community of June Lake and Mammoth Mountain. Mono County Tourism’s Jeff Simpson said an unexpected benefit of the trip has been the the chance for a meaningful and open dialogue that has developed between June Lake and Mammoth Mountain.

There are many visitors from the south who have “The Attitude.” You know it when you see it. They believe everyone is there to serve them while on vacation. This phenomenon is no different than any other popular world-class tourist destination. People are people. On my trips to Bishop, I’ve… Read more »

I have been a resident of Mammoth Lakes for almost a decade. The people (even the richie-richest of them) are decent folk. Those that work in the service industry (almost all of them) are simply fantastic! But perhaps the most honest, hard-working and most polite of all are those of… Read more »

Amen Mammothfolk, traditionally .. and I would say more so now, in times such as a few years back The younger generation especially those born here .. seem to not possess the wonderful good personality that the older generation has. Could be a number of factors there, some good and… Read more »

I’m reluctant to embrace anything reactionary or what has been perceived as “it was better back in the good ol’ days” Big Al. Everything is impermanent, you know. What I can freely say is that the Mexican culture (of Mammoth Lakes, anyway) is deeply religious, extremely polite, self-effacing, and due… Read more »

I agree. Once you see what you’re doing, you can make a change if you don’t like what you see.

I don’t have a problem with Mammoth Lakes, I do have issues with some of the people that are there, but I know a lot of good people too.

beenaroundawhile..I don’t ski,but have to somewhat agree with what you said there.Whenever I’ve HAD to go to Mammoth on a job,what I couldn’t get is how rude some people are up there……one time when I had truck problems and had to go to a garage…another time,on the job at the… Read more »

Wayne, I don’t get it. I know a lot of really nice people in Mammoth Lakes.
Benett

Benett….I mentioned “some” of the people I’ve had to deal with up there..probably not all.

I hear ya Wayne.

Real skiers and snowboarders know the value at June. we get twice the slope time, better communication on the lifts and we don’t have to deal with #$%^#$$^holes like you!!! Stay in Mammoth AKA “Monterey Park in the pines” enjoy the drug, Gangs and the lack of law enforcement. due… Read more »

Southern Californians are not going to drive by all Mammoth’s high speed lifts to spend the day riding old lifts at June. The place would be a constant challange to keep in black ink. Remove all the lifts, and facilities and return the area to it’s natural state. The days… Read more »

Mark- your interview at Mammoth Mountain has been moved up.

I don’t think June Lake and Mountain had an image problem until the ski area closed. Perhaps it should simply be reopened!
Vermont?