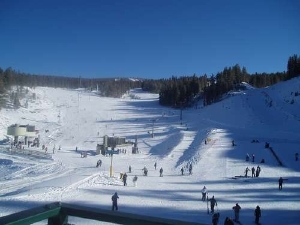 “We are all kind of devastated.”  Connie Black, owner of Double Eagle Resort in June Lake, expressed the blow to all community members when news came out Thursday that Mammoth Mountain would immediately close June Mountain for the summer and next winter season. CEO Rusty Gregory named ongoing money losses as the problem.  He did say he would look to future changes for June.

Black said she was on the phone most of the day talking to people about the upsetting news.  She said, “It was a dreadful winter and the thought of our main tourist attraction not opening – it just leaves people not knowing what to do.  Many are barely hanging on.”  Black said she believes all need to put their heads together and find a way to buy June Mountain.

Supervisor-Elect Tim Alpers was hit with constant calls when people in District 3 got the news.  Alpers said, “The County needs to become involved and be a player in providing as much help as we can to reassure any potential operators that we’re friendly and helpful.”

Alpers said he and others need more facts about the nature of the Forest Service Use Permit for June Mountain and why there was not more warning about the closure considering the “huge impact on the human environment.”

Alpers said that the June Lake community was already hurting badly.  “It was a light winter, the economy was down, there were foreclosures.  People in June Lake,” said Alpers, “are living in quiet desperation.”

A few years back, Mammoth Mountain CEO Rusty Gregory had talked about partial closure of June Mountain which was consistently losing money.  The community managed to convince him then to leave it open.

Connie Black said, “Sometimes these events create opportunities.  We’ve been hit between the eyes, but no one has given up.” We hope to learn more from Rusty Gregory today.

When contacted for comment from the Forest Service, Information Officer Nancy Upham said, “The Forest Service was notified yesterday (Wednesday) evening about this decision by MMSA.   We have not had a chance to sit down and have a discussion with them yet.  These are tough business decisions with significant impacts and we will work with MMSA regarding the terms of their permit and the future planning process they intend to embark on for June Mountain.”

The Mountain should be expropriated by the goverment and become a Forest-Service operated facility (bid out contract to manage). The purchase killed it. Those “family-owned” facilities mentioned earlier make it because they were owned for decades by the same folks who didn’t pay a fortune for the land.

I’m pretty darn sure that Vail Resorts would be happy to purchase June Mountain from MMSA and for a good price…come on MMSA either open the mountain up or sell it…we want competetion in this area dammit. In Tahoe, locals get great discounts because the resorts want the locals to… Read more »

Can you spare a dime?

During the Great Depression millionaires were made by the sackful – while people were standing in bread lines.
How do you suppose that situation came about?
Do you see this happening again?
Do the ultra-wealthy deserve to call the shots?

Don’t take it personally – it’s only business.
He has shareholders he answers to – not those he fires.

I must have been sleeping when I wrote this one… my grammar was TERRIBLE!!!!!! Sorry about that folks.

As money gets tighter and tighter, those in the dough will continue to fly to places like Salt Lake City, and then up to Park City where there are better restaurants, entertainment, art and culture, film festivals … high brow stuff. Leaving Mammoth to the snowboarder crowd who sleep 6… Read more »

Profit, I don’t think you’re not too far off except when it comes to your Rusty comment. I’m pretty sure he cares about the entire experience and not just selling tickets. He wouldn’t get very far if that was the case so let’s keep this real rather than personally attack… Read more »

Accept this fact: We are in the early stages of a world – wide economic depression. And as in any situation like this, the rich will continue to get richer still at the expense of the non-rich. The powers that be have known this fact all along and have actually… Read more »

As soon as you understand that the Infinite Growrh Paradigm is over and that you cannot have Infinite Growth on a planet with 7 billion people and finite resources, you will be able to plan your lives accordingly. If June Mountain was unable to make a profit for many years… Read more »

June Lake Ski Area Is DONE DEAD FINNISHED, time to move on to something else 🙂

Repubs build their lives around development and profit.
The rest focus on providing a means of living for the little guy.
I thought EVERYBODY knew that.

Too bad you had to turn this into a political discussion but since you did, it’s the “Repubs” who build their lives aound development so that the Dems have jobs and can feed the next gen of little libs.

Don't think so
Reply to  Uff-Da

A thousand pardons. But the standard Point of View today is the Repubs have greedily looked after their wealthy pals only while letting the rest of the country (and the little guys) get run into the ground. And now the richest of them are relocating to foreign shores for tax… Read more »

From a environmental point of view it is a win that June mountain has shut down. The resort and ski runs are unsustainable constructions that cause unbalances in the local ecosystems. We do not need any more carbon producing / polluting ski resorts in this special area of the sierras.… Read more »

Allie I hope you don’t drive a carbon producing vehicle. If you were my neighbor I’d razz you everytime you got in your car and drove anywhere. Hope you aren’t making any babies either, as an ever increasing human population is the bigest impact on ecosystems.

Jenny B
Reply to  Allie

Allie, – I see how you think. Get rid of all the human activity in the area so a small group of ‘green’ people including your self can manage it and enjoy it while the local economy crashes and we all have to move back to the city. Very selfish!… Read more »

June is a great little resort, but it needs to grow to attract more skiers and more business to the June Lake Loop – that is a fact. The people in June Lake can’t have a locals only little hill, the economics aren’t there anymore. If you want people to… Read more »

When the going gets tough the rich close down businesses taking what’s left of the money and running. Gregory knows that Republican strategy all too well.

Sorry Charlie
That is not only a Republican Strategy. .In today’s world both parties are to blame.

If you look at it closely we only have one Political party. the party of “BAD Government”

he claims hes an independent

Here’s the thing… if a business isn’t expanding then it’s on it’s way out of business! You have to continue to grow in order to be viable long term. If the June residents really want a long term resort then they’re going to have to come to grips with some… Read more »

As the economy grinds to a halt – it’s all about those who have money.
And those that have money want much more than June can provide.

the powers that be
Reply to  SierraFan

So, what’s so bad about June being a bedroom community for Mammoth?

on busy wknds the town still has ‘hot’beds’…bottom line ..MAMMOTH DOESNT WANT TO COMPETE WITH ITSELF.It has to much invested over there…hence the lack of promotions.Looks Like Im not skiing in Mono county this yr…btw Kirkwood[family owned] 379.00 for a pass. Homewood[family owned] is also very reasonable. And the hospitality… Read more »

You nailed it!!! I was responding the same info on another post.

JMA is the family company that owns Giradelli square. They battled for a very long time to buy Homewood….why? Because another pontential buyer wanted to close the ski area and build about 3000 houses all the way up the canyon, being that it was the last lake front PRIVATE property… Read more »

Its a waste of time to go around blaming everyone. The community can survive without MMSA it just needs strong leadership, and planning which MMSA didn’t provide anyway. Its a great community with alot to offer than just ski operations. A fresh perspective and a new operator could easily revive… Read more »

What is Aplers going to do? Cry to Obama? June was not profitable, end of story.

I doubt it Tims a Repub…

That’s really sad news but many people in the area are to blame for this….the tourists and locals with Mammoth Passes who still avoid June Mtn because “it’s too far from Mammoth”; the community for thwarting all efforts (~10 years ago) by Mammoth to build a “Village” style resort at… Read more »

Or look at it this way — June Lake will survive. It’s a pretty place and with fewer tourists, long time residents may find it a more attractive place to live — like the growth at Crowley Lake. And the ski hill isn’t going away. It will still be there… Read more »

^ There are a LOT of people who DON’T think June is too far to go to ski and ride in winter. Check out the many positive posts in this thread link below in the June Mountain forum:

Lets get some things straight. The town of June Lake has always been a modest area with modest means. It is full of empty mansions and packed shacks, but the long time residents have lived there for a long time because they know how to live in their means. This… Read more »

If the people of June were against the Rodeo Grounds then they would have never elected Vikki Bauer. She was pro Rodeo Grounds.[as were ALL of the resort and motel owners] and she won 2x. Rusty has/had an interest in the property and this is how multi millionare investment firms… Read more »

Rusty has no idea what to do. Look at everything he has put his “fingerprint” on. EVERYTHING new in Mammoth SUCKSSSSSSSS. Rather than go into everything that blows about somebody tell me ONE thing he has created that is an upgrade? Don’t tell me about lifts or the black pass… Read more »

rusty has his irons in too many fires.