By News Staff on December 12, 2013 in Government Agencies/Utilities 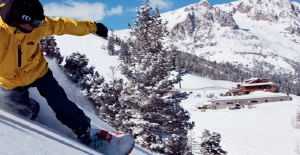 For June Lake, the past year brought home brutal realities with the closure of June Mountain. But, today, June Mountain is back, and skiing will resume with plans for more marketing, more good deals and more facilities ahead.

It was the summer of 2012 when Mammoth Mountain CEO Rusty Gregory announced that June Mountain would close immediately. He later explained that company financial issues related to loans and cash flow demanded serious cutbacks. At that point, Gregory said June Mountain was losing $1.5 million per year.

Since then, June Lake residents, Mono County officials and Ski Area officials have worked on ways to bring June back. They latched onto a better image of a family-friendly ski area with kids 12 and under skiing and riding for free all season long. Ski Area officials said June Mountain would operate seven days per week and will offer first time beginner packages for substantial discounts. The Mammoth Mountain Pass Holders will ski June for free.

CEO Gregory had also stated publicly that his new management team would focus on June Mountain along with Mammoth. For opening day, June Mountain planned an 8:30am opening day ceremony on Chair 2, an 11am toast with June Mountain General Manager Carl Williams and an 11:30 bonfire lighting.

Snowfall so far this year has remained slim but enough natural snow fell to open June Mountain. Next year, CEO Gregory said plans include snowmaking equipment and upgrades to Chair 1.

A debate about drinking is not what my post was about. Its about June Mountains success. Besides, there are millions that drink that dont have a problem w/ it.

Alcohol is poison that kills and hurts millions of people every minute of every day. =

Just so all of you future June Mountain visitors know…..I was told by the bartender at June today that there is no alcohol being sold Monday thru Thursday-only Fri,Sat,Sun.-beer and wine only until mid January IF they get a new license[there is only a finite number available]. The reason is… Read more »

Not Kidding
Reply to  RU kidding Rusty?-setting June for failure?

RU Kidding — Does this mean you can’t have any fun without alcohol? Must be a pretty boring sport. If I were a LOCAL and I was categorized above (its BYOB at June if you are a local) as needing a crutch to ski, I may take offense to it.

Wasn’t the closure announcement the summer before last? June has already been closed for one ski season….

I’d say Rusty’s into another money losing year at June.

Snowmaking is the only way June will survive year after year.

It’s a must that J7 get open ASAP

Congratulations to the June Lake community and to MMSA. MMSA has lived up to their end of the bargain and has done everything that has been promised thus far. On day #1 anyway, the service and vibe at the mountain is considerably different, for the better. Looking forward to the… Read more »

How much service and vibe could actually be different?

There is one run open!!!! Enough of the marketing snow jobs !

Dear Curious, OK, you got me. From my vehicle to the ticket counter the vibe and service were different. We had 2 people in bright green jackets approach us and ask if we needed assistance. We had the friendly Walmart type guy great us and open the door when we… Read more »

Yes, “snow job” and “tentacles” are meant as metaphors.

Apology accepted. Those would be the last things on my list to be massaging.

I’ve noticed a nice change at Mammoth also so far this year. When my pass failed to work a few weeks ago, it was taken care of at the lift. I was sent off to ski a run and a new pass was waiting when I returned. The operators seem… Read more »

Very little snow making systems …the last storm blew the snow we did get away…..ch 2 is open