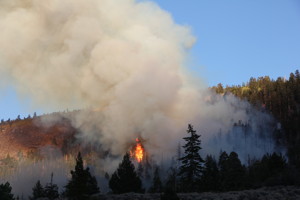 Investigators have determined that the June Fire was human-caused. An employee of June Mountain was operating heavy equipment on June Mountain Ski Area when the fire ignited.

Recent fires on both US Forest Service land and Bureau of Land Management, Bishop Field Office land have been human-caused. These fires have been vehicle-related or equipment related. Please take efforts to reduce the chance of these starts happening.

California is experiencing extreme drought and investigators note that a simple spark is enough to start fires that are growing rapidly.

Please visit http://www.preventwildfireca.org/OneLessSpark/ for more information on how to prevent unwanted fires.