One more service in California that has faced deep cuts – the court system. The Judicial Council reallocated funds to avoid major service disruption, but the Council has required all courts to close down one day per month. 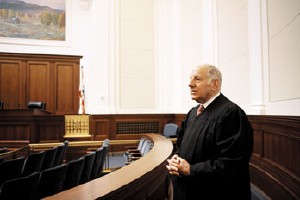 In Mono County, Karen Goforth, Court Operations Manager, confirmed that starting in September, Mono County courts will close up shop the third Wednesday of every month. Goforth said the courts will notify the “appropriate parties.” They may place a sign on the courtrooms – Closed.

We did not receive a return call from Inyo County courts, but presumably the same story will apply for Inyo. Bottom line – an inconvenience for the court system and the public for everything to go dark one day per month.

In a press release from the California Judicial Council, Chief Justice Ronald George, Chair of the Council, said, The mission of the Council is to improve access to justice, so it is extremely difficult to decide on a closure. Justice George concluded that an interim closure would help things in the long run.

The Chief Justice also encouraged judges to take part in voluntary pay reductions since court employees who are furloughed also will be subject to pay cuts. Justice George said he would take such a pay cut.

According to the Judicial Council, this one day per month furlough will result in a savings of $94.3 million statewide. That amount still doesn’t make up the record $414 million cut to the entire judicial branch.

We work to provide daily news to all of the Eastern Sierra, in the tradition of Eastern Sierra News Service and the Sierra Wave. We bring you daily happenings, local politics, crime, government dealings and fun stuff. Please contact us.
View all posts by News Staff →
Suicidal Man Gives Up to Deputies After a 5-Hour Standoff
Mono Grand Jury Report, Continued