He claimed his meetings were not just “showpieces”, but Judge Brian Lamb met with skepticism at his first meeting over 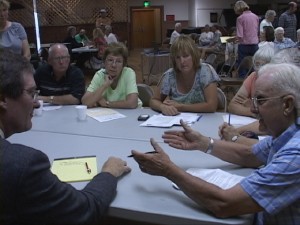 Judge Lamb himself talked for nearly an hour and offered a power point show about the courts. More cases originate in Bishop, more jurors live there. He seemed to suggest this was a reason to plant the new building in Bishop. He made it clear the $30 million could not be split between Independence, where the original project was planned, and Bishop where Judge Lamb had earlier said he wanted the new structure to go.

After his talk, Judge Lamb said he wanted to “break-out” the crowd into small groups for discussion. One man, Ben Holgate, stood up to say he and others wanted to speak as a community, in the open. Judge Lamb, who had not mentioned his plan in press releases, said, no, “I want to proceed this way.”

Reluctantly, citizens gathered around tables where Judge Lamb and Judge Dean Stout sat. Citizens pointed to the extreme need to locate the new building in the county seat of Independence, a town devoted to government service and nothing else. Asked to consider the dynamic impact for Independence and southern Inyo by location of the project there, Judge Lamb initially said he saw no economic benefit from the building. Citizens tried to convince him.

One woman emotionally told the Judge that Independence has done nothing but lose – DWP headquarters, county offices, citizens, businesses. She said someone once told her when they start to move court functions, “everything will eventually be lost.” Judge Lamb offered little response.

Several people privately called the break-out groups “an effort to divide and conquer” and control the dialogue.

Other meetings follow: Big Pine, Thursday at the Town Hall, followed by Tecopa Sunday at the County Building and Lone Pine Monday at Statham Hall. All meetings start at 7pm. The Judges gave citizens until next Tuesday to submit written comments.

We work to provide daily news to all of the Eastern Sierra, in the tradition of Eastern Sierra News Service and the Sierra Wave. We bring you daily happenings, local politics, crime, government dealings and fun stuff. Please contact us.
View all posts by News Staff →
Visitor Report Leads to Mammoth Arrest
Mix It Up! Yellow Lab Mix or Terrier Mix