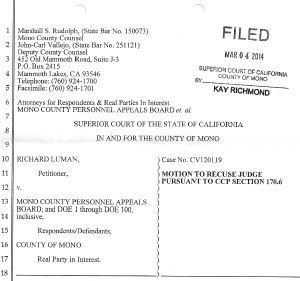 Dick Luman worked as a mechanic for the Mono County Road Department for 15 years. In late 2011, he was fired for an alleged physical fight with a road operations supervisor. He appealed that termination which was upheld on the grounds that he threatened his supervisor, not that he had a fight with him. Today in Mammoth Lakes Court, Luman’s case for reinstatement was scheduled to go before Judge James Garbolino. However, the hearing was continued until March 26th after the Mono County Counsel’s office filed a motion to recuse the Judge on grounds that Mono can not get a fair hearing before him.

Deputy County Counsel John Vallejo filed the motion to remove Judge Garbolino and to ask that another judge be assigned to the case. Local judges had recused themselves in this case. Mr. Vallejo’s motion says “The Honorable James D. Garbolino, the judge before whom this action is now pending, is prejudiced against the County of Mono, so that the County of Mono cannot, and the undersigned believes it cannot, have a fair and impartial trial or hearing before his Honor.” The motion requests a new judge.

It was Judge Garbolino who heard the County’s motion to reverse arbitration decisions made in the case of former Deputy Jon Madrid. The Judge had ruled strongly in Madrid’s favor and quoted from the record numerous details unfavorable to the County and Sheriff’s officers.

The County Appeals Board back in 2013 included Sheriff Ralph Obenberger, County employee Ken Goode and then Supervisor Tim Hansen who filed a dissenting opinion to go against the termination. He argued that remarks that Luman may have made should not have prompted termination. The other two appeals board members upheld the firing.

Luman’s attorney, Katie Bellomo, filed a writ to overturn the termination. She alleged “prejudicial abuse of discretion” on the part of the County and others. The petition basically said that Mr. Luman was fired for making a wisecrack to his supervisor who was initially fired and then reinstated. The petition says Luman lost wages, benefits, retirement contributions and the right to public employment. The petition asks the Court to reinstate Luman with all pay, benefits, seniority and other considerations.

Who does County Counsel work for? You would think Vallejo or Rudolph would/should know the facts by now. Why don’t they stop this charade? How about the Board of Supervisors? Are you awake or what?

I think I’m beginning to understand the the county’s BOS and legal team. They employ the “kitchen sink” method – we’ll try everything once (or twice, or five times…) in the hopes that not only something (anything) sticks, but also to keep these cases strung along for as long as… Read more »

I really think the Board of Supervisors should really rethink their County Counsel…. They are definitely lacking in some skills and I am pretty sure they aren’t being too truthful with the Board. Trying to say a Superior Court Judge from another part of the state is bias and basically… Read more »

An example of Mono panicking that their “little secrets” are slipping out. For once a judge and an arbritrator from out of the county have been brought in and viewed their antics and both ruled against them. Now they are seeing that there are some people in this world will… Read more »

How ironic it is that on the three person panel that decided the fate of Luman, that Obenberger was the deciding vote to terminate him. I think that this will be Deja Vu all over again for Mono County like the Madrid case. It is also ironic that Tim Hansen… Read more »

Once again a perfect example of how Mono County funds constantly are being spent by this county to cover up and deny what should have been done properly in the first place!

Common denominator! Am I the only person seeing the same name over and over again? Ralph Obenberger. Remember, it was his department that investigated the the Luman case! And added two additional “supplemental reports!” That this department is famous for doing! If a judge can recuse himself when he sees… Read more »

When the facts are not in your favor, make up some new facts with a supplemental report! This is like having no reasonable suspicion to stop someone (a middle eastern looking guy) and then six months later when it goes to court, write in a supplemental report that as you… Read more »

What a bunch of hacks in Mono County! After the Madrid legal decision they are going to try and pick a judge that will rule their way regardless of the evidence.

They make the Dukes of Hazard seem like a reality show.

Remember folks this is the County that refused to listen to Ms Bellamo’s many complaints during Mr. Luman ‘s hearing. Including, her main objection that Obenberger had conflicts and should have been recused in the first place as a member of the panel. Now Johnny Vallejo is whining that this… Read more »