Judge Philip Argento’s ruling on the Dawndee Rossy embezzlement trial wasn’t that dramatic Monday afternoon at the Independence Courthouse, but that was the gist. 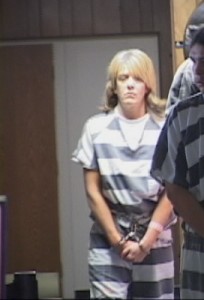 Rossy will self-surrender to the Independence jail August 29 by 2 p.m. Her next appearance in court will be October 20 when Argento will deliver the sentence after considering the probation report.

“I have adopted the plaintiff’s argument,” Argento said in his ruling that Rossy was guilty on every count. Rossy was initially charged with 135 counts with a primary charge of embezzling $1.5 million of public assistance funds while employed as a supervisor with Inyo County’s Department of Health and Human Services.

Over the course of the trial, charges of identity theft of those persons who did not testify in court were dropped as were charges of conspiracy to commit forgery.

During the brief court session, Argento alluded to “the anticipated length of the sentence.” On February 4, the first day of testimony in the case, Rossy rejected a plea deal that would have sent her to prison for eight years.

At that time, Argento encouraged her to take the plea, saying if the prosecution proved all 135 counts, the mandatory sentence could be as much as 31 years.

Defense attorney David Evans asked that Rossy self-surrender in two weeks, rather than being remanded to custody Monday. He cited the recent death of her mother and her recent return to Bishop. Argento granted the request.

I think she will get 10 years …. Although I feel like she deserves 25. She showed no remorse by rejecting the plea offer of 8 years which was reasonable. Shows exactly what type of criminal she is, a very sophisticated one who needs to be off of the streets!!!

Here’s a fair punishment: make her pay for my kids college.

please? i dont know all of the specifics, but come on 30yrs? do you have any idea how much money it costs to incarcerate a single inmate per year? isnt that what this case is about? public funds? After three years in court, at the publics exspense, now you want… Read more »

From what I’ve seen,in my life-experiences,in 90 % of these cases,where a woman commits these types of crimes,there’s usually a bummy-guy in her life either egging her on or participating……is that the case with this one here I wonder ?

Typical Bernie supporting libtard democrap. Why not let all crimes go unpunished? What if this lady bilked your bank account? Took food from your children? How would you feel then?
Stupid people

Noneyah….What about those to choose to employ workers….but when the building is done,not pay the workers or the companies that did the building ?…stating “I’ve paid them enough already “……or how about bilking people out of their money with some trumped-up (no pun intended) university scam ?…..should that be against… Read more »

30 yrs is not long enough.she knew exactly what she was doing.i seen her at the casino living large,max betting the dollar machines.shes a pile of poo.let her rot in jail.maybe she can join hillarys team.. Her and her husband live high on tje hog for yrs.

The bottom line is, she stole money plain and simple. And obviously thought she was smarter than everybody else and would get away with it for as long as she so chooses. I don’t feel she was the “lone wolf” by any means though. People quitting or resigning right away… Read more »

The Odds are the money she took was blown on jewelry , clothing , and our local Casino . 1.5 million sounds like a pile of case but it really isn’t much these days ! Two nice houses in bishop possibly . Heck , I have blown $5000 on one… Read more »

People are always complaining abot the clients defrauding the system and how they should be punished, but w h e a person in a position b of authority does it, everyone says it’s a victimless crime why should she be in prison. Does that mean Bernie Madoff, WHO stole millions… Read more »

Would you hire her. She has got major problems, she deserves what she got.

Yes I would . But I won’t let her handle my money. You asked.

Not judging @Trouble….but do you not feel that “a thief, is a thief”? In my wise old age I have found that if someone steals a penny they will steal the table it sits on.

Wondering, you make a pretty good point there. I’m not against some form of justice. It just really bothers me how much time she is likely to get for, in my mind, not agreeing to take the DA,s offer. Call me a bleeding heart or whatever,,but when I read the… Read more »

I get you @ trouble….I feel for her also, as we have all made mistakes. My main thought is her family, as I hear she has a child. I can not imagine the void they will feel with her gone. I hope that she is a lesson for anyone else… Read more »

I’m curious as to what changes Inyo County has taken to create more checks and balances so these kinds of abuses can’t happen. Certainly Ms. Rossi seemed to indicate that she wasn’t the only person absconding with funds from this office. (Not that that is any kind of legitimate defense).… Read more »

I like your way of thinking Sugar. As for the rest of you, oh well

If I were the judge,she’d get 10 years,probably out in 7….and then some type of restitution pay-back for the rest of her life…no one wants or expects 30 + years in prison.

She should have defended herself by explaining that she had been “extremely careless”. Not even the FBI would prosecute that, even when it means the loss of state secrets.

I’d be more simpatico with the pitchfork crowd if the law applied evenly to everyone. Including those in power.

Tourbillon…if you want to get political,I’m sure in some states and Countries,if you were to embezzle money from people with some phony “university”,or put people to work for you with some deal,then when the work is done,you fail to pay them for it….or work the system to the point you… Read more »

Lock her up! And we can spend more tax dollars on her ass… Trial and investigation for 3+ years and now we can foot the bill for a 20 year jail sentence… Justice is clearly served…

Trouble…I’m positive you’d feel the same way if she stole a million + of YOUR hard earned dollars. And if it WAS Saudi Arabia , she’d have no hands .

Maybe at first Rick, the question should be how I would I feel in 2047 when she gets out.

She needs to be punished…but here’s what I would do. You sell ALL your holdings, houses,boats, motorcycles, whatever, and you can come up with an even 1 million dollars before sentencing, I’ll give you 5 years in prison. The county will absorb the loss of the remainder of the amount… Read more »

And what about getting the money back???

Maybe she should have stole from Canada then, right Trouble? She will get plenty of job training if she wants it.Cooking, cleaning,license plate making.. Quality and well deserved stuff!

Trouble….good idea…no jail time….no fine….no restitution….she’s already “suffered enough”….let the tax payers she bilked out of $ 1 million + pay out more of their money to get her help and pay for her new job training…trouble….your a funny guy….If I ever meet you I’ll buy you a beer.

Didn’t say any of that lower. If you were wondering what I would do is. Take half her pay for rest of her life . Half here social security and maybe non working days in jail or treatment for the first 2 years. A order not to handle any money… Read more »

Sorry about all my spelling errors. Please dont cut off my tongue.

She’s already lost part of her family and most of her freinds. Do you realize in Canada she would actually get real help and job training ? She would be out in a few years. This ain’t Saudi Ariba !

Trouble, you’re right, this ain’t Saudi Arabia but it ain’t Canada either. She had her chance at a plea deal. If she took it maybe she would have been released after a few years. She made her bed now she must lie in it.

Trouble, I hope feel the same way for the hundreds of thousands of folks in prison for drug possession, a victim-less crime that has ruined many lives. This piece-of-work stole $1.5 million from poor people, and likely has a fair amount of that stashed away somewhere.

Oh for God sakes Trouble! She had a good paying job with the county! She made over $5000.00 a month, how much more money does a person need! There are plenty of hard working people who would give anything for the supervisor position she held. I don’t feel sorry for… Read more »

What good does locking her up do? As opposed to what, allowing her to walk around as if she did not steal millions of dollars? She is a criminal, a thief, an embezzler, and a liar. There are penalties provided by law for that. She got caught. She should have… Read more »

Jeff, how is she going to pay a penny of this back from behind bars? How much will she have saved up by the time she gets out in 2047 ? Is she really a public danger to any of you?

@Trouble….and did you think she is going to pay it back if she was not in jail? lol

$100 to a donut there will be more delays between now and sentencing…and then,after sentencing,some type of ankle-monitoring while they go through the appeal process….

Exactly! Unbelievable that she didn’t take the 8 year plea bargain.

I bet she is wishing she did! The woman that embezzled from Washing Mutual pleaded out at 3 years….and didn’t she take about as much?

What good does locking her up for many years do now?

trouble….if for nothing more,sending the message to others that might want to bilk the system for millions….do the crime,do the time…keep your hands in your pockets…..it’s not O.K. to be a thief….

@Trouble, Our criminal justice system is directed at deterring and mitigating criminal acts. She wasn’t caught shoplifting. She was found guilty of stealing a substantial dollar amount of public funds while serving in a position of public trust. How would letting her run free help deter the next would-be embezzler?… Read more »

What sentence would you give her?

Major deterrent for future embezzlers. Did they ever recover the stolen $$$ ? She should’ve taken the 8 year deal , & been out in 4 or 5 .