The annual meeting of the non-profit Friends of the Eastern California Museum on Saturday, March 9, will feature a presentation by local historian David Carle discussing his latest book, “Putting California on the Map: Von Schmidt’s Lines,” a biography of Allexey W. Von Schmidt. One of most famous “lines” created by von Schmidt was the border between Eastern California and Nevada, from Lake Tahoe to the Colorado River which he surveyed in 1873. Disputes over the border between the two states were not settled until a US Supreme Court ruling in 1980. 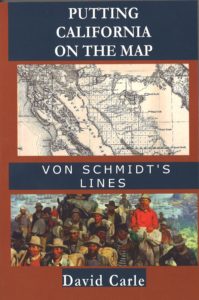 The FECM Annual Meeting is free and everyone is invited to attend, regardless if they are a member of the non-profit group which provides financial and volunteer support to the Eastern California Museum.

The event will begin with a reception at 3 p.m. at the Eastern California Museum, located at 155 N. Grant Street in Independence. At 5 p.m. the event moves to the Independence American Legion Hall, 201 South Edwards Street. A silent auction, the introduction of FECM officers for 2019, and the potluck dinner will begin at 5:30 p.m. Carle’s talk will follow.

“Putting California on the Map” is the first full-scale biography of von Schmidt and his role in shaping 19th Century California. Von Schmidt came to California with the wave of gold seekers in 1849. But the civil engineer and surveyor left the gold camps and, literally, had a hand in putting California on the map. He was one of the first to survey around Mono Lake, in 1855, a trip which also made him one of the first white men to travel though what is now Yosemite. He then helped create the first dam and aqueduct system to bring drinking water to San Francisco, among many other engineering projects in the city.

Returning to surveying, von Schmidt completed the daunting survey of the California border from the Oregon state line through Lake Tahoe (which was not completely in California or Nevada, as some earlier surveys erroneously stated) south to the Colorado River.

Carle says of von Schmidt, “He was a surveyor and civil engineer, an involved citizen of San Francisco … and a pioneer whose personal triumphs and tragedies enlarged the California Dream.”

Carle, a well-known Eastern Sierra historian, has written 13 non-fiction books and was a California Park Ranger for 27 years.