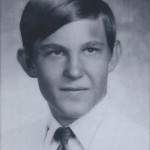 He worked for Department of Water and Power for 17 years.  He really loved spending time setting up and running the sound system for his church and participating in church activities.  He loved the Lord, his family and friends.

John is also survived by his daughter Faith Holbrook, her husband Ralph and three grandchildren, Zachary, Helen and Joseph.

Celebration of life graveside services were held April 25 at the Independence cemetery with a gathering after the services at the Methodist Church.