By News Staff on October 1, 2019 in General Misc. Stories

NEWPORT BEACH, Calif. — The ultimate western race has arrived with the launch of John Wayne Grit Series the first annual fundraising event by the John Wayne Cancer Foundation (JWCF), whose mission is to bring courage, strength and grit to the fight against cancer. Runners and hikers will trek across stunning natural landscapes that were once where John Wayne filmed some of his iconic movies to raise funds that will support novel and innovative programs that improve cancer patients’ outcomes and save lives. 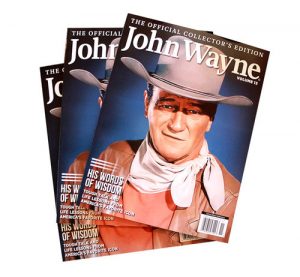 “We are thrilled to announce the first annual John Wayne Grit Series,” says Ethan Wayne Director. “Both the Alabama Hills and Ridgway are not only where my father filmed some of his timeless movies but are destinations for anyone who loves the great outdoors. With the help of the generous supporters that join us we will be able to make a big impact.”

On Saturday, October 5 participants will enter the gateway to Mt. Whitney, the tallest mountain in the contiguous US, taking to a trail through the untouched desert of the Alabama Hills near Lone Pine, CA for a half marathon or 10k. The area is known for its picturesque rugged terrain including majestic natural rock formations like the famous Mobius Arch, blue skies, snow packed peaks, and the photo worthy snap down Movie Road. The course also passes through many John Wayne movie locations like How the West Was Won and more.

To celebrate the 50th anniversary of the legendary film that earned John Wayne his only Academy Award, True Grit, a race will be held at the ranch that is featured in the film in Ridgway, CO on Saturday, October 12. With the steep forested San Juan mountains as a backdrop, participants will pass alongside rustic ranches on lush hillsides, view the spectacular fall changing trees, rushing rivers, and wildlife. The “True Grit 10k” takes place during a weekend full of events to celebrate the anniversary of the film with a 3-day festival, Ridgway Old West Fest, organized by the Ridgeway Western Heritage Society including scenic tours, concerts, celebrity attendance and more.

All fundraising efforts will support JWCF initiatives including pioneering cancer research programs such as the world renowned Fellowship Oncology Program at the John Wayne Cancer Institute, aid the work of the John Wayne Alumni Fellows, and contribute to Block the Blaze, a premier program that educates youth about sun safety and skin cancer prevention.

For more information on how to participate visit https://johnwayne.org/jwgs/

@Joann, there you go again. Normal people (serenity now LOL) don’t take issue with Bakker and Jones cuz they were preachers. They take issue cuz they stole millions and killed hundreds, respectively. I’ll leave it at that LOL

Did they show Repo Man? Best John Wayne scene ever.

The dude was an actor. I’ll save “hero” status for people who’ve actually done something heroic.

Of course he was an American hero.

John Wayne was and is a “hero” to a lot of people. Whether in his personal life he lived up to “your (Mr. Pilgrim’s)” standards, is immaterial to what he means and has meant to millions, maybe billions of people. Of course Mr. Pilgrim, I am sure your life is… Read more »

Joann Lijek, one of the problems is that people tend to vote for their TV friends and TV “heroes”, instead of actually doing any thought or contemplation. The people, for example, who claimed that a president was born in Kenya weren’t doing it because the claim made sense. They were… Read more »

I didn’t say people were thoughtful, or smart. I will say that this new trend of going back in time to bash people who are long dead and can’t defend themselves is BS. I was alive in 1971 and I don’t remember any controversy about John Wayne being a white… Read more »

Yikes! Dunno if the TV preacher comment was inspired by the skit Rush Limbaugh used to play with an Al Sharpton sound-alike singing “Barack the Magic Negro”, but what else could it be? Reminds me of the John Wayne quote (just search Wikipedia) that includes “the blacks” as if they’re… Read more »

Sorry shifty, never saw the skit you’re talking about. To me Barack Obama spoke and acted like a TV preacher. Some of those guys are white, ie. Jim Bakker, Jim Jones. Don’t try to color me with your race crayon. Point is, if he was a purple alien from Mars,… Read more »

@Joann, Maybe you were unaware of it but concerns regarding JW’s beliefs actually go way back. There were concerns expressed back in the late 70’s when Orange County Airport proposed adding John Wayne to their name. Those concerns fell on deaf ears in the very conservative OC. (OC has evolved… Read more »

Wow, Charles O. Jones, I read the Wikipedia article about John Wayne and I am more impressed with him than ever. Thank You for referring me. When I was a kid in Huntington Beach I used to think he was a jerk, just like the real estate agents in white… Read more »

@Joann,
I wasn’t attacking you. I was offering some context as you had indicated you were unaware of any controversies from years back. Sorry that had to send you off on such bizarre rants about monkeys, real estate agents, etc.

John Wayne was no hero; he was an actor who played dress-up; he was a fake cowboy, a fake soldier, and a racist. He belongs in the dusty cans of bygone celluloid and nowhere else. By the way, his vile comments in the Playboy article were hardly a mere “slip… Read more »

I can’t believe that the Orange County Supervisors (idiots) are considering removing John Wayne’s statue and name from the JOHN WAYNE AIRPORT because of an article in Playboy magazine 50 years ago . I am NOT a trump supporter, but I have to agree with him on one single point… Read more »