“On Tuesday, September 13, 2011 at about 1:30 p.m. a Los Angeles Department of Water and Power crew was trimming brush around the LADWP’s transmission lines approximately three miles south of Big Pine on the west side of Highway 395. While the work was going on, it appears as if trimming equipment hit a rock, causing a spark that ignited a fire. When the crew realized that a fire had started, they quickly accessed shovels and fire extinguishers they had nearby at the work site to try to put the fire out. However, when they attempted to fight the fire it began to spread very rapidly. For their safety and to avoid injury and property damage they called for firefighting assistance and evacuated the area. In addition to responders that included Cal Fire, the U.S. Forest Service, Bureau of Land Management and local volunteer fire departments, the LADWP responded with 14 employees, six water trucks, a dozer and two water pumps. The LADWP is evaluating how similar work in the field is conducted to insure that all safety and security issues are addressed. Cal Fire continues its investigation into the fire and will make an official determination as to the cause. Additional information will be released as soon is it is available.”

The John Fire was listed as 100 percent contained as of 7 am Friday, Cal Fire reports.

Continued patrols by local resources were expected today, with the final demobilization by resources done by noon today.

The “John Fire” has burned 5,353 acres and is 95 percent contained, Cal Fire reported this morning. Full containment is possible by Friday.

The Inyo County Sheriff’s Department cancelled the evacuation advisory. All roads are open.

Cal Fire reported the John Fire was at 3,000 acres with 65 percent containment as of 5 p.m. Wednesday, with 366 personnel being utilized.

Big Pine — The John Fire, which began burning Tuesday afternoon at approximately 1:30 PM, has now burned 2,000 acres and is 15 percent contained. Crews worked throughout the night to contain the fire burning in the Crater Mountain area south of Big Pine. While the fire shows little smoke or flame this morning, there are several hot spots throughout the fire that have the potential to flare up and consume additional acreage. Until the fire is completely surrounded by fire line and additional mop-up has occurred, hot spots are a continued threat for fire activity.

There is no immediate threat to structures in the area, however, an evacuation advisory remains in place for the south-west portion of Big Pine so residents will be prepared to evacuate if the order is given.

A CodeRED Emergency Notification announcement was made last night to residents in the south-west portion of Big Pine of the evacuation advisory. Additional announcements will be made as new information is received by the Inyo County Sheriff’s Dispatch.

The John fire is in unified command with CAL FIRE, California Highway Patrol, Inyo County Sheriff and Los Angeles Department of Water and Power. In addition to CAL FIRE, resources from the Bureau of Land Management and the U.S. Forest Service, as well as personnel and equipment from, Big Pine Fire, Bishop Fire, Mammoth Lakes Fire and other local agencies are providing significant assistance in fighting the fire. Total resources on the fire include 31 engines, 25 hand crews, 12 water tenders, 2 dozers, 9 fixed-wing aircraft, 6 helicopters and 38 overhead for a total of 525 personnel.

No injuries to firefighters or civilians have been reported. Cause of the fire is under investigation.

The “John Fire” near Big Pine has grown to approximately 2,000 acres and was 15 percent contained as of 7 a.m. today, officials said.

The fire began about 1:30 p.m. Tuesday, originating about two miles south of Big Pine. Cal Fire reported the fire initially burned to the west, but a wind shift turned the fire toward the south and causing it to burn up and over Crater Mountain.

The fire was active on different fronts overnight, said Glenn Barley, Information Officer for Cal Fire. Barley said the fire was laying down this morning, but officials are still concerned about several hot spots when the winds kick up today.

Barley said firefighters were able to make progress overnight and are working to get a line around the fire.

No injuries have been reported, and the cause of the fire is under investigation.

An evacuation advisory has been issued for residents in the southwest area of Big Pine, west of Highway 395 and south of Walnut St. Residents should be prepared to leave on short notice. An evacuation center has been set up at the Big Pine Tribal gymnasium.

A wildfire burning South of Big Pine in the Crater Mountain area has blackened approximately 1000 acres. Crews responded to the fast moving fire at approximately 1:30 PM on Tuesday afternoon. Approximately 120 personnel from CAL FIRE, the U.S. Forest Service and local agencies have been fighting the fire on the ground and from the air. Equipment on the fire includes 6 engines, 4 crews, 3 water tenders, 1 dozer, 4 air tankers, 2 lead planes, 1 air attack and 1 helicopter.

The fire originated approximately 2 miles south of Big Pine and initially burned to the west. A wind shift turned the fire toward the South causing it to burn up and over Crater Mountain. No structures are currently threatened, but protection of natural and cultural resources in the area are also a consideration.

Crews will be working throughout the night to contain the fire. No injuries to firefighters or civilians have been reported. Firefighting efforts have been assisted by CHP, Inyo County Sheriff, and Inyo County officials and Los Angeles Department of Water and Power. Cause of the fire is under investigation.

A fire estimated at 150 acres as of 5 p.m. Tuesday was burning south of Big Pine. 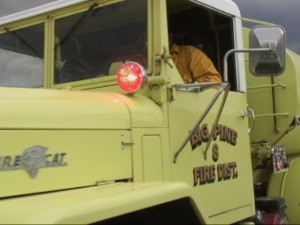 The Inyo County Sheriff’s Department reported the fire started three miles south of Big Pine, on the west side of US Highway 395, and was moving in a westaward direction.

There has been a line made on the north side of the fire, according to Carmer Roper, spokeswoman for the Inyo County Sheriff’s Deparment.

At last report, at 5 p.m. Tuesday, the fire was at 150 acres, with zero percent  containment. No structures are threatened, and no evacuation orders have been issued.

On scene were a dozer, airtanker and hand crews.

I would like to thank all the firefighters for their hard work and for keeping
the fire from reaching our houses out on Birch Creek. I am greatly
appreciative!
Marla

As of 7:00 PM, September 14, Cal Fire reports 3,000 acres with 65 percent containment, with no structure threat. http://cdfdata.fire.ca.gov/incidents/incidents_details_info?incident_id=590

I am an Elk hunter I have a tag for that area for October. I was driving around the area to familiarize myself with the area. Myself and a local man was approx 100 yards from the start of the fire. The fire was started by a crew useing weed eaters at the base of one of the power towers. We immediately drove to the Fish and Game Hatchery as it was the closest possible location to report the fire. I walked up to a uniformed Fish and Game person standing in front of the office and reported the fire to him and he did nothing. This was approx 10 or 15 minutes after the start of the fire. I wonder how much less the fire would have burned if that Fish and Game officer would have helped to get things moving sooner.

B Michelson
Reply to  Doug

Don’t you have a cell phone to report it yourself?

I am familiar with the area, the fire started one mile south of Big Pine. The Hatchery is around five. How is it the closest place to report?

How do you know he didn’t do anything? Did he tell you no?

Good Job Everyone !!! Thank You All.

Was at 1250 acres last night and 5% contained. Haven’t found any updates yet this morning.