By News Staff on October 23, 2016 in General Misc. Stories, Obituaries 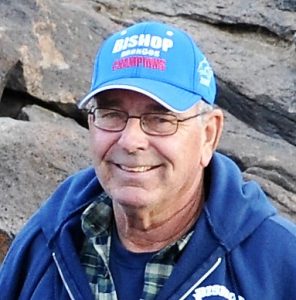 His family has peace in knowing Jim has no more pain and God has welcomed him to Heaven. He was preceded in death by his parents James and Anita and sisters Ann and Mary.

Jim will also be missed by niece Annette Barrett and her family, as well as many great friends and extended family members.

Jim was raised in San Diego, graduated from Hoover High School, then enlisted in the US Army. He served in the 3rd Armored Division in Germany from 1963-1966. Following military service, Jim worked as a crane operator for NASCO in the San Diego shipyards building Navy ships. Joyce and Jim started their family in San Diego, but decided to relocate to Bishop in 1979 so their sons would have safer, cleaner and more outdoor-adventure filled lives. Jim worked for Mammoth Mountain Ski Area and Clair Construction in Bishop.

His family was the most important thing to him and he made the most of every opportunity to watch his beloved kids and grandkids play softball, baseball, football, soccer and hockey. He never missed a play, awards ceremony, graduation or family birthday party. Jim loved camping with the entire family and a big group of friends at Diaz Lake every Memorial Day weekend.

Jim was a skilled mechanic, talented welder and an amazing “fixer” of all broken things. Jim really shined in the good old destruction derby days when he helped all three of his sons build winning cars. He was happiest when he could lend a hand, even fixing things for strangers or people he hardly knew.