Last night, four members of the Bishop City Council unanimously voted to appoint former City Councilman and Mayor Jim Ellis to fill the vacancy left by the resignation of Councilman Dave Stottlemyre at the end of December. Stottlemyre resigned to become the new Inyo County Assessor on January 5th. 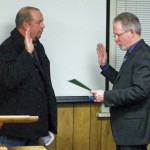 The Council had 60 days in which to fill the vacancy either through a special election or by appointment. They choose to save the estimated $25,000 that it would have cost the taxpayers to run a special election by selecting from the two candidates in the November election that expressed interest. The estimated cost of the special election was up considerably from estimates of the $10,000 to $15,000 quoted to fill a Council vacancy in 2013.

Newly-elected Mayor Pat Gardner called for a motion to fill Stottlemyre’s vacant seat for the final two-years left on his term. Councilman Joe Pecsi made the motion to appoint Ellis to fill the seat. Newly-elected Mayor Pro Tem Laura Smith noted during discussion that, “The City is lucky to have such two qualified, experienced former councilmen and candidates from which to choose.”

It was noted that a precedent had been set two years earlier with the appointment of Keith Glidewell on February 11, 2013 to finish the two-years left on City Councilman Jeff Griffith’s term. Griffiths was elected to the Inyo County Board of Supervisors representing the Second District in the June 5, 2012 election. He resigned his Council position in December of 2012.

New Councilwoman Karen Swartz noted that the vacancy of Stottlemyre’s seat was well-known in December and that only Ellis and Glidewell had shown interest. Both Pecsi and Smith stated that they had approached others in the community that they thought might be interested in the job, but none of them came forward.

During Public Comments, former candidate Howard Wu told the Council that, “As a person who participated in the process, I feel that Jim Ellis would be a great addition to the Council.”

However Bishop resident Gary Colbert told the Council that he felt former Councilman Keith Glidewell was a better choice. He cited Glidewell’s advocacy of new ideas which brought savings to the City by going “paperless.” He also credited Glidewell with pushing to approve the city’s new Granicus computer program. That program offers live streaming and archives of city council meetings on the City website to the public.

Another speaker, Noe Gadea, told the Council, “I would have liked the Council to consider the third option of having the Council explore a special election.”

Mayor Pro Tem Smith responded to Gadea by saying, “That option was explored, but it would have cost the taxpayers $25,000. We felt it was unfair to ask city departments that had already made great sacrifices during the last budget negotiations to take yet another cut to pay for a special election. So we decided on going with the appointment option.”

The November election results for City Council were very close. Only a small percentage of votes separated many of the candidates. The Council decided that they would honor the voter’s decision from the election results and award the appointment to the candidate with the next highest number of votes, Jim Ellis.