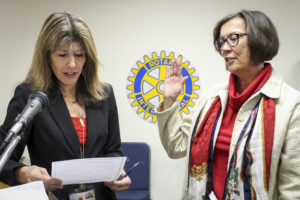 Jean Turner, right, NIHD’s newest member to its Board of Directors, is sworn into office Wednesday evening by NIHD Board Secretary Sandy Blumberg. Photo by Barbara Laughon/Northern Inyo Healthcare District

Turner, who retired from the County of Inyo this past June, was one of three applicants to file for the recent Zone 2 vacancy. An Ad Hoc Committee of current board directors, Dr. John Ungersma and Mary Mae Kilpatrick, interviewed three applicants before recommending Turner’s appointment to remaining board members MC Hubbard and Pete Watercott. The recommendation was approved 4-0.

In presenting Turner as the nominee, Kevin S. Flanigan, MD MBA, the Chief Executive Officer of NIHD, described the screening process and the difficulty the committee members had in selecting between Turner, Jane Thompson and past board president Denise Hayden. He noted that the committee spent hours on the decision as all three were eminently qualified and each had her own strengths.

With Turner’s appointment, the NIHD board is once again whole with five members following the October resignation of Phil Hartz. Under current election law, Turner’s appointment will last until the November 2018 election. At that time, there will be an election for the Zone 2 seat and the winner will serve the final two years of Hartz’ term. At the end of those two years, an election for a full four-year term will take place.

“I truly am honored to have been appointed by such a knowledgeable and effective governing body,” Turner said Thursday morning. “I have appreciated the current leadership style and the incredible employees in the Northern Inyo Healthcare District, and look forward to being part of a great team serving our local community.”

In public service her entire adult career, Turner moved to Bishop in 1986 to work in local public human services. Thirty-one years later, in June of 2017, she retired from almost fourteen years as the Director of the Inyo County Health and Human Services Department.

Following in the footsteps of her mother who has spent her retirement years serving on various boards and commissions, Turner knew that the call to continue serving the public would remain strong. Vowing to give herself six-to-12 months before committing to new endeavors, she spent her summer and fall hosting family and friends in a variety of outdoor adventures including a High Sierra pack trip, camping, hiking, swimming, climbing, biking, and geology tours. She particularly enjoyed having her two grandchildren come to “Camp Grandma’s,” and alternately visiting them in San Diego where they live with their dad (Turner’s one child) and his wife.

The opportunity to serve on the NIHD Board presented itself just shy of her six-month mark in retirement. Remembering her late husband, Dan, whose CT scan at NIH more than 10 years ago uncovered what turned out to be terminal throat cancer, she felt the NIHD Board vacancy might provide an opportunity for her to give back to her community and to the very hospital that diagnosed and helped extend the life of her beloved Dan.

Additionally, she thought her leadership experience in public health and human services, along with her service on the Governing Board of California’s 35-county consortium for insuring medically indigent adults, could be a good fit for a governing role at NIHD.

The NIHD Board also elected its slate of Board Officers for 2018: Dr. John Ungersma will serve as President; MC Hubbard as Vice President; Mary Mae Kilpatrick as Secretary; Jean Turner as Treasurer; and Pete Watercott as Director-At-Large.

Oh, the rewards of incompetence. Let’s hope she watches the books of NIHD better than she did as the County’s welfare director. Can you say embezzlement?

The former Director of Health and Human Services who was quoted in the Inyo Register saying “I take full responsibility ” for $1.5 million that was allegedly embezzled from her dept. Somehow she shined brighter than the other 2 applicants. Inyo County and the ‘good ole boy’ system is still… Read more »