By Community Reports/Events on September 28, 2022 in Obituaries 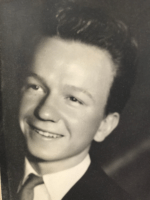 James Frederick Harlis (Jim) passed away in Bishop from complications of Leukemia.

He was born on October 4, 1938, in Santa Ana California. He lived high on a hill with his family where they were
surrounded by orange groves. He went to Bradford Avenue Elementary School in Placentia CA. and was a very proud 4-H member, raising hogs to sell at the L.A. County Fair.

The family moved to Big Pine during 7th Grade with parents Bill and Ruth Harlis, sisters Joy, Jean and brother, Jeff.  He was enrolled in Big Pine High School, where he played basketball, football, and tennis. He proudly graduated as a Big Pine Warrior.

After graduation Jim went to college at Cal Poly Pomona, where he attended for one year, so he returned to Big Pine. Shortly after he moved to Lancaster CA to attend Antelope Valley College where he met Beverly Claude and they married in 1957.

He worked for the telephone company and found out his wife was pregnant with their first child, so they moved to Santa Maria to take a job with Knudsen Creamery as a Cheese Maker. They had their first daughter, Yvonne at cheese cutting time!

Jim and his family then moved to Glendale CA where he pursued an electrical career and joined the IBEW Electrical Workers Union. He apprenticed with an Electrical contractor while taking classes in Pasadena to become a Journeyman Electrician.

They had two more children in Glendale, a son with his namesake, James Jr. in 1962 and beautiful daughter Dana in 1965.

He was able to retire at age 57 from the electrical construction field.

Jim loved his family and enjoyed spending time with them. He took them camping, waterskiing, motorcycle riding and so forth. He loved taking them to visit relatives especially in Big Pine.

Jim married Laura Nell Stanley and they spent the last 15 years pursuing his life’s dream of returning to the Owens Valley where he connected with childhood friends and met some new friends.

He lived his life in celebration of the stories he witnessed and captivated everyone and made them laugh. He was known to his nieces and nephews as Uncle Jumper because of the spring in his step. His fellow electricians called him “sparky” while his family simply called him Dad.

He was a good father, husband, and papa, very caring and loving! He was a good storyteller and always a big tease. Dad was a true cowboy, riding horseback listening to country music and Cowboy Church.  He will truly be missed and his stories will live on by all who loved him.

Jim was preceded in death by his parents Bill and Ruth Harlis. He was survived by his daughter Yvonne (husband James), daughter Dana (husband Jeff), son Jim Jr. and grandchildren, Gianno, Corrado, Nicco, Nicole, Emily and Ricky as well as nieces, nephews, and cousins.

A Celebration of Life will be held at a later time for family and close friends. In lieu of flowers, donations can be made in his memory to Big Pine Civic Club, PO Box 595, Big Pine, CA 93513.