At this stage of Dennis Domaille’s Tioga Inn affordable/workforce housing project, the only real news would be a vote on the part of Mono County’s Board of Supervisors. So, it looks like there is a decision, but like everything else connected with this project, it’s complicated.

Here’s the abbreviated history: Domaille runs the gas station/Whoa Nellie Deli off Hwy. 120 just south of Lee Vining. His proposed Tioga Inn project was approved in 1993. Then came the plan for workforce housing, 100 units with 150 bedrooms to be constructed in three phases. Mono County’s Planning Commission approved the project but then all heck broke loose, focusing on the impacts of potentially doubling the population of Lee Vining and the cumulative impacts on the schools and fire department.

To roil the waters even more, Domaille explained he could not restrict the tenants to only those employed at the hotel, gas station and deli. That restriction could jeopardize his ability to acquire grant funding for the project. 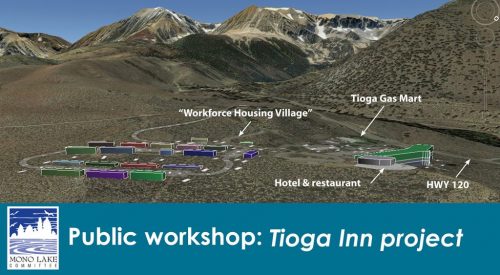 At a June 29 Board meeting, some issues still remained including an emergency route into the housing element that would cross Los Angeles Department of Water and Power land and a safe path from the project into Lee  Vining along Hwy. 120. Last Tuesday, those issues were addressed: CalTrans was supportive of the multi-use path, but had no funding for such a project until possibly 2024-25. Los Angeles Department of Water and Power had no objections to the emergency access road, but had a few terms of use.

At that June meeting, the Board opted to postpone a final decision until Domaille and the Mono Lake Kutzadika’a Tribe had an opportunity to discuss and formally consult. The Tribe objected on the basis of the land’s significance as a Cry Dance area and a footpath into Tribal grounds at higher elevations.

That consultation was still the final sticking point laid out by Wendy Sugimura, Mono’s community development department director, this past Tuesday. Attempts were made to coordinate a formal consultation, but none occurred due to COVID-19 concerns expressed by Tribal representatives.

Then it came time for Supervisors to vote on one of three options: approve, deny or continue. The first motions were to postpone to a future meeting in order to provide more time for consultation between Domaille and the Tribe. All were split 2-2 with the recusal of Supervisor Stacy Corless. Supervisor Bob Gardner eventually made a motion to deny the project, that also went down 2-2 with Supervisors Gardner and Rhonda Duggan on the denial side of the vote and Chair Jennifer Kreitz and John Peters on the don’t deny side.

Based on the failure of a motion to approve the project resulted in a denial. We needed an interpretation of that ruling by Simon. Here it is for those who want to get down in the weeds: at the heart of it, a proposal before the board needs three affirmative votes for approval. So, the failure of the approval motion to obtain those three votes resulted in no action. That was the legally-significant action resulting in de facto denial. The law provides that when a Supervisor is recused, they are presumed to have voted on the “prevailing” side which would have to be the side that voted against the motion to approve since that vote failed.