By Charles James on October 15, 2020 in General Misc. Stories 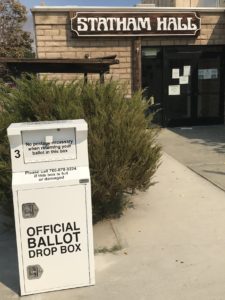 There were concerns expressed by some people in Lone Pine on social media about a ballot drop box sitting outside Statham Town Hall and whether it was an “official” one placed there by the county. It is “official,” says Inyo County’s Registrar of Voters, Kammi Foote.

It is a valid concern. The California Republican Party (GOP) has been placing “unofficial ballot drop boxes” around the state, largely in hotly contested congressional districts. The GOP is refusing to say how many or where the drop boxes have been placed or commit to removing them.

“Harvesting ballots” is legal under California election laws, but the state’s top elections and law enforcement officials have said that these boxes are illegal and threatens the security of the election. They want them removed, with the State Attorney General Xavier Becerra, a democrat, saying that the GOP could face criminal prosecution.

California Laws on Ballot Harvesting states that California voters can legally “designate any person to return [their] ballot to the elections official from whom it came or to the precinct board at a polling place within a jurisdiction.” The question is, do the “unofficial” ballot drop-off boxes meet that standard and intent.

Most likely a court will have to decide…a sign of the litigious election strategy being employed by both parties in this election.

Some of the GOP party’s ballot drop boxes were labeled as “official,” even though they are not authorized by county election officials. The GOP is saying that it will remove any signage that claims “official” status to avoid confusion with those used by county registrars, but the party is threatening to deploy even more of them which, they claim, is legal under California election laws.

The problem with private ballot drop-off boxes is simple: What’s to stop any party, whether Democratic or Republican, from harvesting and then “selectively” turning in ballots that favor their candidates or causes? 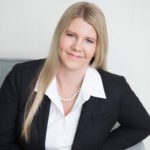 State election authorities and county registrars are urging voters to avoid the GOP boxes, saying they aren’t secure, and to instead send ballots by mail or place them in official boxes that have their counties’ logos displayed on them. If in doubt, they encourage voters to call them.

Inyo Registrar of Voters, Kammit Foote, says that “The drop-off ballot box in front of Statham Town Hall in Lone Pine is an “official county drop box,” and that they collect the ballots on an almost daily schedule. She advises voters to “Always look to trusted sources for accurate information.”

One such source, recommended by a Sierra Wave reader, “Alex D,” is the State of California Secretary of State’s website.

If you want to check if a ballot box is official, go to the CA Secretary of State website. If it’s listed there, it’s official.

The best place to find accurate voting information is your local elections office. In this case, that is the Inyo County Elections office: https://elections.inyocounty.us/voting/

Shameful actions by the GOP

Although I haven’t always seen eye to eye with the GOP’s positions, I used to respect them as a reasonably principled bunch. Sadly I can’t say that any longer. This is just another in the long list of examples of why.

Charles O.Jones
Not too much to respect about many of them anymore,is there ?

Glad to see that it seems the Statham Hall ballot box is legit,since it’s where I deposited my ballot last week. But isn’t it amazing ,the Country we live in now,citizens even having to question if their vote is going to count or not,what with the statewide GOP trickery taking… Read more »

Everyone should sign up for ballot tracking if they use an absentee ballot. They have links on the state web site, and I think the local one as well. I dropped my ballot in the drop box at city hall in Bishop, and got a message the next day that… Read more »