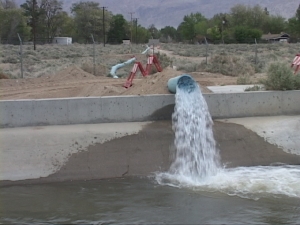 The big, blue pipeline leads from Lone Pine’s town wells in the background up to the LA aqueduct.

Scrooge. So, more than a few were offended to hear that LADWP wants 577 acre feet of Inyo groundwater to “pay back” what DWP gave to Diaz Lake Park over the past six years. Lone Pine residents were particularly upset since the water would come from their town wells.

At Monday night’s Inyo Water Commission meeting, Mark Bagley of the Sierra Club pointed out that ten years ago, LADWP had agreed to supply 1600 acre feet of water per year for additional mitigation. 250 acre feet of that was supposed to go to Diaz Lake. LA dawdled around and only now will come across with the water next season. Bagley said technically LA owes Inyo those ten years of water.

Inyo County agreed to pay back the 577 acre feet of Diaz Lake water by pumping Lone Pine’s town wells. When citizens saw the several hundred yard temporary blue pipeline lead from their town wells to the aqueduct, they protested. One man pointed to the Inyo-LA Water Agreement which says at a certain point, “groundwater shall no longer be exported via the Los Angeles aqueduct from the wells supplying the lone Pine Water System.” Citizens cried violation of the agreement. Inyo disagreed.

Inyo Water Director Bob Harrington said Inyo decided to take care of the Diaz Lake “water debt” from the Lone Pine town wells which the county technically controls. Lone Pine residents point to the fact that DWP pumps have drawn down their water tables by 40 feet over the years.

DWP manager Gene Coufal had sent Inyo County a letter in January to lay out every jot and tittle of acre feet of water given to Diaz Lake. DWP wanted Inyo to clear up its water debt “as soon as reasonably possible.”

Unlike DWP, Inyo jumped right to it.

We work to provide daily news to all of the Eastern Sierra, in the tradition of Eastern Sierra News Service and the Sierra Wave. We bring you daily happenings, local politics, crime, government dealings and fun stuff. Please contact us.
View all posts by News Staff →
Inyo Water Commission recommends legal opinion on water agreement and ranch irrigation
Lupe Almaguer of Mammoth Lakes sentenced to 60 years to life for child molestation