The stars of the Eastern Sierra right now – the Tule Elk south of Big Pine. Crowds of motorists continue to line the side of the highway as they snap photos like paparazzi. 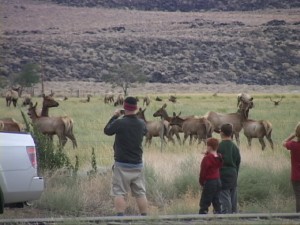 The attraction this time of year – the elk mating rituals. As traffic whizzes by the fields, male elk, called bulls, herd the females, called cows. Fish and Game Associate Wildlife Biologist Mike Morrison confirmed that the bulls fight for dominance and a chance to mate with the cows.

Morrison said this ritual starts in Lone Pine elk herds first and moves into the Big Pine herd. The elk seem to stage all of this activity close to the highway.

The Fish and Game biologist said that numbers of elk are now lower than the past, mostly because hunters have taken out numbers of the herd. Morrison said their numbers exceeded capacity and so the hunts were opened.

While one or two big bull elk now dominate the herd, 23 young bulls are hanging out for their chance to compete. For the bulls, it’s an exhausting dance. You can hear their high-pitched vocalizations, known as bugling. Scientists say that females are attracted to the males that bugle more often and have the loudest call.

We work to provide daily news to all of the Eastern Sierra, in the tradition of Eastern Sierra News Service and the Sierra Wave. We bring you daily happenings, local politics, crime, government dealings and fun stuff. Please contact us.
View all posts by News Staff →
Inmate Gardners Reap Veggies
Bureaucrat Beat: Bad Boys, Paralyzed Bureaucrats and Klondike Conflicts?