On his hometown radio station, State Senator Roy Ashburn, who represents Inyo County, made a statement. In an interview with KERN AM 1180 radio host Inga Banks, Ashburn said, “I am gay. Those are the words that have been so difficult for me for so long.” 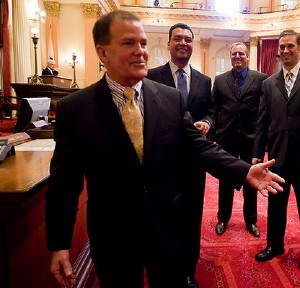 Reports hit the wider media throughout California and the country that Ashburn had left a gay night club, called Faces, with a man, driving his state-issued Chevy Tahoe. Officers said the Senator was swerving. They booked him on drunk driving. What followed was a firestorm of media reports that accused Ashburn of public opposition to all gay rights bills over 8 years while hiding that fact that he is a homosexual.

Ashburn has served as a Kern County Supervisor and a State Assemblyman and Senator. He ran for office on a platform of family values and recently voted against recognition of same sex marriages from other states.

The radio interview on KERN, which serves the Bakersfield area, revealed Ashburn’s awkward and very public revelation of who he is. The Senator told radio host Banks that he has done a lot of soul-searching since his arrest. He said like anyone else, he has lost his drivers license and use of the state vehicle. He lost the secrecy that shrouded his life too. Ashburn said that he thought he could keep his personal life personal.

To accusations of hypocrisy, Ashburn said that he voted against gay rights’ bills for his constituents. He said, “My votes reflect the wishes of the people in my district.”

Before these recent developments, Senator Ashburn’s office had scheduled mobile office hours in Independence at 2pm next Monday, March 15th. That schedule is still on at this time.

We work to provide daily news to all of the Eastern Sierra, in the tradition of Eastern Sierra News Service and the Sierra Wave. We bring you daily happenings, local politics, crime, government dealings and fun stuff. Please contact us.
View all posts by News Staff →
Snowpack Now Close to Normal
Pipe Bomb Explodes on Bishop Reservation