Murmurings and speculation about the mysterious “Recyclescope” have reached a fever pitch in the days leading up to Earth Day 2018, when the public will have the chance to not only feast its eyes on the as-yet unseen contraption but also interact with this one-of-a-kind, otherworldly work of art. 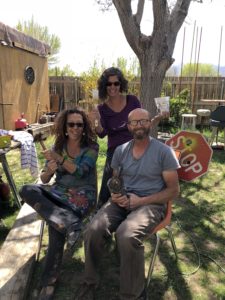 Artist Judyth Greenburgh, Jael Hoffman, and David Tidwell take a break from putting some finishing touches on the mysterious “Recyclescope,” to be unveiled this coming Tuesday. Greenburgh was commissioned to create the piece to help promote recycling/County of Inyo photo

The County will officially unveil the Recyclescope – a giant, rotating kaleidoscope comprised of repurposed and recycled parts – at 11 a.m. Tuesday, April 17 during the regular Board of Supervisors meeting at the County Administrative Center, 224 N. Edwards St., Independence. The Board is scheduled to adopt a proclamation that recognizes April 22 as Earth Day and encourages participation in local Earth Day events, and then recess the meeting so that its members may join the public in the parking lot for a first glimpse of the soon-to-be-famous apparatus, conceived as a way to encourage recycling throughout Inyo County.

“So far only a select few have actually seen the Recyclescope so the anticipation and suspense are great,” said Chairperson Dan Totheroh. “I’m excited about the unveiling and even more excited about the idea of using something so creative to promote recycling. Obviously recycling is extremely important and anything we can do to promote that is extremely important as well.”

The Recyclescope will also be one of the major attractions offered at Sunrise Rotary’s Earth Day Sierra event on Saturday, April 21 at Bishop City Park from 10 a.m.-3 p.m. The public will be invited to view the Recyclescope and participate in a wholly unique interactional, educational, and communal public art experience.

Supervisor Jeff Griffiths, a member of Sunrise Rotary, said the anticipation is similarly great for the Recyclescope’s Earth Day Sierra debut. “We were looking for something that would be fun, artistic and educational,” he said. “We are so excited to have the Recyclescope as the centerpiece of our celebration.”

A surprisingly enchanting combination of whimsy, ingenuity, and engineering, the Recyclescope was designed under contract by Judyth Greenburgh of Darwin, who enlisted the help and skills of fellow artists David Tidwell of Bishop and Jael Hoffman of Olancha. The trio worked to bring “Gladys,” as Tidwell has affectionately named the structure, to life over the past 3 months in time for an Earth Day debut, working from Greenburgh’s initial concept and under guidelines set by the County for what the finished product must include and accomplish.

The end result is an approximately 8-foot tall, portable structure, equipped with 6 scopes – each with mirrors angled in different directions to create different patterns with reflected light. Gladys’ scopes can be used by multiple people at the same time and from multiple angles – with an infinite number of optical images to experience as recyclable materials rotate by courtesy of a hand-powered device. Those objects are “fed” to Gladys by those using the Recyclescope. It’s “Little Shop of Horrors” meets “Pee Wee’s Playhouse” and thoroughly fun and impressive.

“Gladys is a material girl and a bit of a monster,” Greenburgh said. “She has a voracious appetite for recycled materials (aluminum, plastic, clear glass and colored glass) but is very particular that you sort her food out for her. She is quite large and sociable and many people of all ages can enjoy her in some way whilst learning about what items can be recycled.” As an incentive, children who to take the time to learn to sort the recycling and remove it after “feeding” Gladys will receive a button that says “I Fed Gladys.”

It had been the County’s desire to develop a “reuse and recycle” display for use at community events, and in schools and public buildings, as a complement to its other ongoing public education activities. As the operator of seven landfills and transfer stations, the County is committed to promoting recycling as a way to reduce waste, meet State guidelines, and help keep the landscape litter-free.

County Administrator Kevin Carunchio specifically envisioned a large, human-propelled kaleidoscope made of recycled materials – something, he said, that was “capable of exciting the imagination with respect to how otherwise discarded objects may be reused or recycled” and which could “foster a sense of community or create a communal experience.”

Unbeknownst to Carunchio, Greenburgh had been creating her own kaleidoscopes out of recycled materials for about a year, having completed about 6 large-scale ones and 50 small-scale ones, and was enjoying her second art show when the County CAO serendipitously discovered her artwork at the Independent Press Project in Bishop last summer.

“I was flattered, honored to be asked (to create the Recyclescope) and it felt like a dream came true to be commissioned to make something I was passionate about for a cause I believe in,” Greenburgh said. “Nothing better than to inspire something worthy like promoting recycling.”

According to Greenburgh, her vision for the Recyclescope was that it be a communal experience and create an “event” each time it is used. “Usually kaleidoscopes can be exclusive – a one on one relationship,” she said. “I wanted to make it a party, that many people could enjoy at one time. No waiting in line! This kaleidoscope allows for many people to view it, to add their own recycled materials and collaborate.”

Greenburgh said the idea for the multiple-use scope came from a snag in her initial design process and her friend Martin Powell suggesting she use a horizontal turntable like she did with a prior parlor scope. With the idea born, Greenburgh built a prototype out of wire, plastic pipes and a Lazy Susan.

“It was this monstrosity I took to David Tidwell. One of the requirements was to make the kaleidoscope human-powered. I had the concept but not the mechanical, technical or metal working skills. I had seen David’s work at his gallery, The Eastside Art Hub, and was impressed with both his ingenuity and sense of aesthetic. His role was to take my idea and make it work in a beautiful way – he made the turning mechanism and framework for the kaleidoscopes and sculpture to attach to plus make sure it’s transportable,” Greenburgh said. “After my concept, he was the lynch pin for the whole project. I had a vision of the piece having a sense of theater and carnival quality too with a rotating icon on the top. Jael immediately came to mind to create this. Her sense of whimsical humor and monster creations were perfect … It came out much better with David and Jael involved than I could have done alone – plus it’s more fun creating with others.”

The trio committed wholeheartedly to the concept of using all reused or recycled items, procured from salvage and recycling yards and even local merchants. They have incorporated into Gladys everything from a golf cart differential, old road signs, and used metal bars, to bottle caps, pipes, and Mason jar lids. “We … just went looking for stuff and it was exciting and fun,” Hoffman said. “It’s been a really fun collaboration.”

According to the artists, they received a lot of support in their endeavor as well. Tidwell said Doug Brown of Brown’s Salvage Yard was especially generous in providing materials for the project. Greenburgh also gave credit to Cap Aubrey and Mike Luffman of Inyo County Recycling and Waste Management, Greg Corliss of Country Glass, Joe Todd of Alpine Signs, and Jenifer Castaneda of Blue Sky Realty.

Overall, Greenburgh, Tidwell, and Hoffman are proud of the finished product – and eager for the public to see and experience Gladys.

“It came out 1,000 times better than what I thought it would be,” Tidwell said. “I didn’t realize it would be this cool.”

“I was totally charmed,” Hoffman said of seeing Gladys in her full form. “It’s one thing to talk about it and plan it but it’s another to see it all come together.”

“I am very happy with the finished piece, it came out better than I imagined. I think she will entertain, inspire and educate all at the same time,” Greenburgh said. “I think it will create a sense of wonder and excitement.”