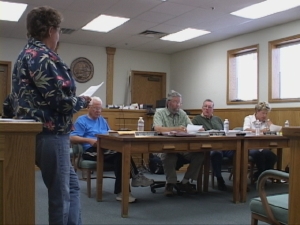 nyo Rancher Daris Moxley had pled her case about a loss of water under her DWP lease at meeting after meeting. She has pointed to the Long Term Water Agreement which speaks to maintenance of irrigation water. Finally, Monday night, the Inyo Water Commission agreed to try to help.

Almost three years ago, Moxley went public with the news that the Department of Water and Power had cut her lease water which led to dry conditions in almost two-thirds of her ranch lease and a sell-off of her cattle. Moxley pointed to the Inyo-Los Angeles Water Agreement which says “DWP shall continue to provide water for LA-owned lands in Inyo County in an amount sufficient so that the water related uses of such lands there were made during the 1981-82 runoff year can continue to be made.” Ranchers and others see that as a commitment to continue with their irrigation as it was in 1981. DWP points to their view that lessees get 5 acre feet of water per acre and no more.

Monday night, Moxley stood up again and told the Inyo Water Commissioners of her plight. She asked if Inyo would hold DWP to the Water Agreement. In the past officials have ignored Moxley’s plea. This time, commissioners debated the issue and decided to recommend to the Inyo Supervisors that they direct their staff and attorneys to bring back a legal opinion about the agreement and lease water.

Moxley added that DWP threatened to terminate her lease because she did not use what little water she had to irrigate pastures in public view to make things “look good.”

We work to provide daily news to all of the Eastern Sierra, in the tradition of Eastern Sierra News Service and the Sierra Wave. We bring you daily happenings, local politics, crime, government dealings and fun stuff. Please contact us.
View all posts by News Staff →
Sierra Wave Image of the Week
Inyo’s water debt to Los Angeles?