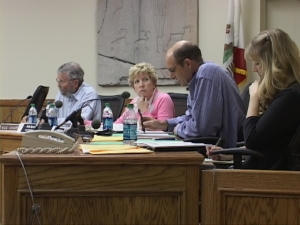 The Inyo Water Commission was formed under the Long-Term Water Agreement between Inyo County and the Los Angeles Department of Water and Power in the early 90s. It was designed to be the public body that connects the people of the Owens Valley to water issues. Inyo County recently announced that two seats on the Water Commission will become available for appointment.

The two seats are currently held by Sally Symons and Mike Prather. The history of the Water Commission has been highlighted by perceptions that the Supervisors will not appoint anyone who will shake up the status quo with DWP. And, some Commissions have complained that the Board of Supervisors failed to listen to their recommendations.

At one point, the Commission was nearly dissolved, but saved by members of the public who said they feel this appointed body fills a purpose. Commissioners do get a chance to weigh in on water issues and are charged with watchdogging the Water Agreement requirements of environmental protection.

For those interested in sitting on the Water Commission, the Inyo Supervisors are now accepting applications to fill the two seats. You should submit a request for appointment to the Board of Supervisors at P.O. Box N, Independence, CA 93526. The requests must be received by the Clerk of the Board, Pat Gunsolley, on or before 5:00 pm, October 31st.

There are some very dedicated and knowledgeable people who have worked many years with the water issues in the Owens Valley. I hope at least a few of these folks will be thinking about submitting an application. The Water Commission can be strengthened by the addition of these folks. There… Read more »