The following is a press release from Inyo County CAO Kevin Carunchio:

The Inyo County Board of Supervisors have reiterated their long-standing support for the construction of a new courthouse in Independence by offering the state a free a parcel of land for the new courthouse, and officially requesting that the state court system authorize spending $2.3 million in state court funds to build the new, modular courthouse, which would be located adjacent to the county jail in Independence. 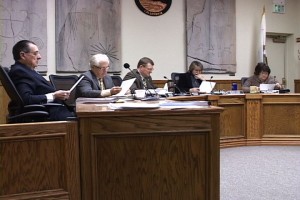 The Supervisors have approved and sent a letter to the state Administrative Director of the Courts detailing the county’s offer of a parcel of land for the new facility, and requesting the state grant final approval of the Independence Courthouse Project. The new courthouse would be approximately 10,000 square feet, be handicapped accessible, have a courtroom and a hearing room, and, because of its proximity to the county jail and juvenile facility, would reduce the costs currently incurred to move defendants from the jail to the courts, the letter notes. The new Independence Courthouse would allow the state Superior Courts to continue to hold all criminal proceedings in Independence as promised by Presiding Judge Brian Lamb and the Administrative Office of the Courts as part of its decision to build a new courthouse in Bishop. A final decision by the state is expected on Sept. 4.

“There has been a long history of Inyo County supporting keeping court facilities in Independence,” said Susan Cash, chairperson of the Inyo County Board of Supervisors, on Tuesday, Aug. 16. It was pointed out that the county originally submitted a plan the state for a new Independence Courthouse adjacent to the county jail in Independence in 2009.

“This board and previous boards have made a long-term commitment … to support adequate, worthy and appropriate court facilities in the county seat of Independence,” said First District Supervisor Linda Arcularius. She pointed out that over the past several decades the county invested millions of dollars in a new jail and juvenile facility located in Independence, and has also spent county money to draft plans to build a new justice center in Independence that would have housed the courts. Those actions make it clear the county has “always intended” to have a fully functioning Superior Court facility in Independence, she said.

“For the convenience of the residents of the South County, it’s imperative to have a courthouse in Independence,” said Fourth District Supervisor Marty Fortney. Court facilities in Independence are also critical to “keep costs down,” he added. In addition to utilizing the new Independence Courthouse, he also stated the current courtroom in the historic county courthouse should also remain in use so the county is never faced with having to transport prisoners to a court in Bishop, which would “devastate the county budget.”

Fifth District Supervisor Richard Cervantes dissented, and said he would rather see the state invest in remodeling the current courtroom and offices in the historic courthouse in Independence. Other board members, however, stated that representatives from the courts, locally and on the state level, had told them personally that the courts have no interest in trying to remodel the historic court facilities instead of building a $30 million court complex in Bishop. After the state court system assumed ownership and control of court facilities, buildings and real estate several years ago, the county has had limited ability to influence even how those facilities are operated.

Although “the county isn’t in the court business, and hasn’t been for years,” and the Administrative Office of the Courts will make all the final decisions, Inyo County Administrative Officer Kevin Carunchio said the offer of the parcel of land and the letter of support for the new Independence Courthouse would once again demonstrate to the state courts that “the Inyo County Board of Supervisors is committed to having adequate court facilities in Independence.” Since the county and its citizens have been unable to change the AOC’s decision to build a new court facility in Bishop, building a new Independence Courthouse could be considered a case of “making lemonade out of lemons,” he noted.

The $2.3 million Independence Courthouse would be funded with $1.2 million in court fees that the local Superior Court has collected and retained in a Construction Fund over the years, and a commitment of $1.3 million from the Administrative Office of the Courts.

“Although no county in the state can determine where a new courthouse is built,” Carunchio said the Board’s support of the Independence Courthouse project and the offer of a free parcel of land would send a positive message that the county is more than willing to work with the state to ensure the Independence Courthouse project will be moved out of the planning stage and into the construction phase, by the Administrative Office of the Courts’ September 4th deadline.

STOP wasting money you the taxpayers will never have

The money to build the courthouse facilities in Independence is available in an existing fund and from courthouse fees.

Eamon, It’s tiresome to have to reiterate this again, but these are not “well-heeled” residents of Independence and Lone Pine. They are in fact fairly well-known, liked, and highly- regarded throughout the County. But even if they were “well-heeled”- so what?! They are not entitled to the same rights as… Read more »

Bob What is secure transportation? Can’t you just put a prisoner in the back of a patrol car and drive to Bishop? It isn’t like we need a 50 passenger sheriffs van ala SB or LA county. What about the telephone or AV arraignments we heard about? Are the Deputies… Read more »

When you really look at it, it’s quite costly to transport one or two prisoners. You now have to pay a deputy his hourly wage, and benefits to drive that prisoner an hour, sit through his trial, and drive him back. Never mind fuel costs, and wear and tear on… Read more »

How many prisoners are actually transported? How many are free on bail? You are only talking about criminal cases, right? The deputy has to sit all day to guard him? Why can’t the bailiff do that? The free land wasn’t free until after the Bishop court was approved. Why wasn’t… Read more »

Sadly, it isn’t just the trial itself. It’s the arraignment, all the appearances, the whole shebang. In the interim, that deputy can’t just jaunt back to Indy to hang out for a few before he turns around. And unless I miss my guess, they likely have a deputy assigned to… Read more »

What’s wrong with the court they already have? What is it a half mile away?

J.H.: You ask the wrong questions. The real question is- “What exactly do YOU know about this issue?” There have been many months of debates, arguments, and discussions on this very issue. It has been covered in the local newspaper, debated at public meetings, written up in studies, documents and… Read more »

When the AOC was looking at siting the new courthouse in Independence they hired me to research possible locations. At that time the Supervisors were not willing to “give” the parcel next to the jail but would “sell” it to the AOC. The AOC told me that if they had… Read more »

Supervisor Marty Fortney is quoted as saying that having to transport prisoners to a court in Bishop would “devastate the county budget.” Does the county pay mileage for jurors? What is the cost of transporting prisoners to Bishop Vs. mileage for 2 dozen jurors going from Bishop to Independence? What… Read more »

JaneE,
Jurors do not require secure transportation. Only gas money, or a bus pass.