By News Staff on May 18, 2016 in General Misc. Stories, Government Agencies/Utilities, Public Event

After 47 years with the Lone Pine Volunteer Fire Department, 27 as chief, LeRoy Kritz announced his retirement during the opening public comment period at Tuesday’s Inyo County Board of Supervisors’ meeting. 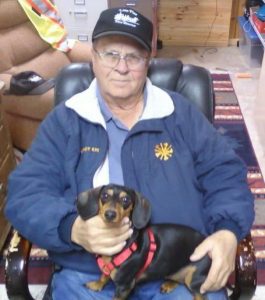 Citing “hard times in the future,” particularly with area ambulance services, Kritz said he “didn’t want to fight those battles.” Kritz and other volunteer fire chiefs have had issues with the request for proposals issued by the Inland Counties Emergency Medical Agency last year. “There are some things I couldn’t sign,” Kritz said. He went on to say perhaps it was time for someone else to take the helm at the department.

During his department report, Sheriff Bill Lutze said he was shocked by LeRoy’s retirement. “I’ve worked with him for 25 years,” Lutze said. “We’ve had an amazing relationship.”

Ironically, or maybe just timely, Kritz’ announcement came during the same meeting the Supervisors voted on recommendations to ICEMA’s governing board, the San Bernardino Board of Supervisors, on what departments made it through the RFP process. ICEMA will now negotiate contracts for exclusive status for emergency medical services in Inyo.

The review panel recommended Symons Emergency Specialties in the Bishop Emergency Operating Area and Lone Pine Volunteer Fire Department in Lone Pine. The remaining areas, Olancha, Little Lake and Panamint Valley had no respondents to the RFP. Big Pine and Tecopa volunteer departments are grandfathered in and need not negotiate contracts.

According to Health and Human Services Director Jean Turner, the Olancha Volunteer Fire Department would continue to serve its area, just not as an exclusive provider. The latter two areas have, historically, been served by mutual aid.

Mike Patterson with Sierra Life Flight urged the board to “ask ICEMA to address the contract negotiations with flexibility. The Original RFP was boiler plate and complex. That may be the way things are done in San Bernardino but not the best way to do things in Inyo.”

The Board approved a plan to fully automate the Inyo County Library by October 2017 at a cost of $35,000, some of which is budgeted into this fiscal year.

As Rick Benson, assistant chief administrative officer, and Nancy Masters, county librarian, were finalizing the plan, they made contact with Back Stage Library Works, a firm highly recommended by a consultant who responded to the County’s earlier request for proposals. According to Benson, Back Stage could, tentatively, automate the system in six weeks at a cost of $20,000, once library staff completes the shelf list, moving the completion date to November 1.

Basically, between Back Stage and library staff and volunteers, the job would be done a year earlier for close to the same cost.

The Board approved the preliminary plan, to get the shelf list process moving forward, with the understanding that a contract with Back Stage would be on its next meeting agenda, June 7.

Rick Delmas, president of Friends of the Bishop Library, had been reluctant to commit funding to the project at the Board’s April 26 meeting, but seemed on board with the proposal from Back Stage. “I like that we’re going forward and it won’t cost an arm and a leg.”

While Delmas still wants to see a long-term vision for the library, he indicated funding may be available allowing the Friends to partner with the county on the process.

LeRoy Kritz
Bless you for your dedication. The times they are a changin and unfortunately not for the better.