By News Staff on June 12, 2015 in Government Agencies/Utilities

It’s been nearly 10 years since Inyo County volunteer fire departments have had to deal with requests for proposals in order to continue providing ambulance and emergency medical services. After a marathon word-smithing session at Tuesday’s Board of Supervisors’ meetng, those same departments are probably very grateful it will be another 10 years before they have to do this again. 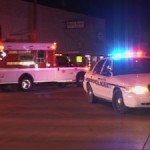 The RFP, presented by Inland Counties Emergency Medical Agency Administrator Tom Lynch, ran over 40 pages, accompanied by a 30-plus page contract. The document was “onerous” according to both Leroy Kritz, Lone Pine fire chief, and Steve Davis with Olancha’s fire department. ICEMA’s function is to provide support and manage regulations for Inyo, Mono and San Bernardino county EMS providers. The relationship between the local providers and the regional administrator has been shaky.

Lynch’s presentation ended with alternatives: either go with the RFP process for exclusivity in each department’s area or go through a permitting process, provide services on a non-exclusive basis and run the risk of losing the territory to a for-profit provider. County Administrator Kevin Carunchio urged the board to stick with the RFP process. Board Chair Matt Kingsley opened the floor to hear Kritz and Davis’ concerns.

“I would support an RFP that was less onerous,” said Davis. “This is so far outside what we’ve ever seen.” As an example, Davis cited a clause that required providers to prove they used recycled paper. Kingsley suggested the Board go through each of the providers’ concerns and fix them. After three hours of discussion and a long talking lunch, the Board ended with what they hope is a kinder, gentler RFP.

“I’m proud of the Board,” Davis said in a phone interview Wednesday. “I’m glad we did what we did. The Board stood with us; they demonstrated their support. It’s still a fair process” While Davis described the process as painful, he added that if the Supervisors hadn’t gone through the pain, something they missed “could come back and bite us.”

As to why this RFP was significantly more complex than previous documents, Davis said there have been regulatory changes over the last 10 years. “This RFP was more structured, more legaleze,” he said, “to cover ICEMA in case of challenges.”

The RFP, prepared by ICEMA, included a lot of boilerplate more appropriate for urban, for-profit providers. Kritz started the discussion with a list of concerns that included extensive reporting, the potential loss of inter-hospital transfers that he described as his department’s “bread and butter,” termination of services “for convenience” and paying prevailing wage. “That kind of defeats the purpose of a volunteer department,” Kritz said.

Another source of confusion was inconsistencies between the RFP and the attached contract. Lynch explained that the contract included in the document was just a sample used by San Bernardino County.

Lynch back-pedaled with alarming speed, explaining that many of Kritz and Davis’ fears “were not our intent.” Many of the fixes were resolved with the inclusion of “with the Board of Supervisors’ consent or recommendation.” Some had to be filtered through attorneys.

In response to the fact the RFP was obviously designed for urban, for-profit providers, both Lynch and Carunchio said the best possible long-term fix would only come through legislation that exempted rural, volunteer providers from many of the state regulations.

Lynch will be back in early July with the re-worked RFP. “We’ve made a lot of progress,” said Davis with the hope the document would “come back the way we think it will.”

Good piece of work by local volunteers working together. It is not easy to convince urban administrators that this area is even more rural and isolated than they think.