Tuesday’s Inyo County Board of Supervisors meeting started with a long line of union members urging the County to return to the bargaining table to break a negotiation impasse. 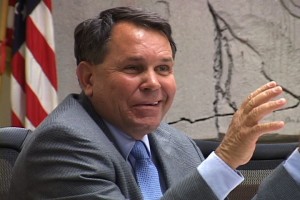 Impasse was reached in late March with the County standing pat on a 1-percent cost-of-living increase for the next two years and 2-percent in the third year. The Inyo County Employees Association, Local 315 of the American Federation of State , County and Municipal Employees is holding firm for a 2-percent increase over the next three years. Union members have been working without a contract for nine months.

The issues voiced at the opening public comment period have been repeated at town meetings and at demonstrations. Morale is low, employees are overworked due to staffing shortages, recruitment and retention have become issues and the County’s front-line workers feel undervalued, invisible.

Nearly in tears, Denise Muniz, a 20-year employee, admonished the Board, “You guys are holding out for 1-percent and I can’t even get a day off because we’re short-handed.”

More than a half-dozen union members explained they loved their jobs. One worker said she felt lucky to have the job, lucky to have a car, with no A/C, to get to work but she could have more take-home pay working for minimum wage and going on Medical.

Transportation Planner Courtney Smith, speaking for himself, not as a representative of the negotiating team, proposed a compromise to get both sides back to the table and “move forward.” His proposal would give employees’ a 2-percent COLA for the 2016-17 fiscal year, retroactive to April, 1-percent for 2017-18 and 2-percent the following year with an increase in longevity pay from 2 to 3 percent as an incentive.

With the exception of District 1 Supervisor Jeff Griffiths, the Board remained mute. Responding to a suggestion from Health and Human Services’ Grove Street office staffer that the Supervisor get to know the employees and what they did, Griffiths said he spent a lot of time at the Bishop office.

During the course of the formal meeting, CAO Kevin Carunchio noted newly-appointed Planning Director Cathreen Richards had accepted a salary $1,000 less a month than her predecessor Josh Hart (Richards will receive $8,500 a month). He also mentioned the wave of highly-qualified new and potential employees to County job openings.

In other action, the Board got a look at the unintended consequences of trying to ban mobile vendors from Inyo County rights-of-way—like opening a can of red-tape-wrapped worms.

Three weeks ago, District 5 Supervisor Matt Kingsley opened a discussion on restricting or banning mobile businesses from county right-of-ways. The issue: an Airstream parked at a downtown Lone Pine intersection selling Mt. Whitney Gear. From Kingsley’s perspective, he was protecting permanent businesses; from Mt. Whitney Gear partner Mary Scudder’s perspective, he was protecting one business by banning another.

An ordinance was discussed, opening the possibility of special permitting. But the Board voted it down the following week 3-2. The June 27 workshop was held to get more public input and discuss options.

Deputy County Counsel Terry Walker explained that while no one had a vested right to do business on County roads, they could not be banned for no reason. The best reason was public safety. The most viable form of regulation was through parking ordinances. Parking ordinances, apparently, are a complex can of worms.

Admittedly, Lone Pine has a downtown parking problem, especially during high-tourist traffic. During the Board’s discussion, most potential parking restrictions would negatively impact somebody, not just mobile vendors. Then there was the issue of enforcement—or the lack thereof.

The Supervisors appeared to agree that any parking regs would have to be tailored to or apply only to specific communities and the process would take a long time to work out.

Kingsley was frustrated. “I’m not a proponent of more regulations,” he said. “We can work hard to come up with innovative, responsible regulations because that’s what we’re being forced to do to keep squatters from squatting on Count property.”

Longtime Local you are right.

Has anyone been wondering what happened to all the money they set aside for the new one stop shop building at Wye?

One of these creeps tried to give away our land. We have a deed for it ; they don’t. They don’t understand about ownership.They need to go before 2020. What about the unacceptable levels of lead and copper in the Lone Pine water? Nothing has been done about that. How… Read more »

Constituents should remember this when voting day rolls around. The Supes make a comfortable paycheck, have health care and are not on the front lines. Holding firm on a slap in the face COLA is degrading and sends a clear message that the employees are not valued, and can be… Read more »

Sounds like we have board members and a CAO that are making decisions about how program funding is used when they themselves have no idea what’s even happening to carry out that program funding. 2020 cannot come soon enough to get these ignorant guys outta there!

Totheroh and Pucci are up for election next year. 2020 is Griffiths, Tillemans, and Kingsley.

Even with a grand less than former director, $8,500 a month? Wow, that’s a lot of cabbage. Wonder why six of the county directors left in the last few months. It appears they were all paid well. Maybe it was the company they were forced to keep.