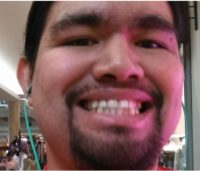 Friends and relatives of George Barlow addressed the Inyo Board of Supervisors at
Tuesday’s meeting, asking for an investigation into the altercation between Barlow and Inyo County Sheriff’s deputies last weekend, an incident that has been widely viewed on the Internet.
“What would you do if George Barlow was your son?” asked Roger Barlow during the initial public comment period. “The whole community is your family.”
Board Chair Jeff Griffiths responded within limits of items not on the Board’s agenda. “Legally we can’t discuss,” he said. “The Sheriff is an elected official. I’m not sure what role we play in this. I’m personally concerned and looking forward to a full investigation.” Sheriff Jeff Hollowell did address the issue during the agendized department reports. The District Attorney’s office will conduct an investigation in the use of force, a long-standing
policy. In addition, the Sheriff’s Department has hired an independent firm to conduct an investigation. Both investigations should take three weeks, Hollowell said.
“I understand the frustration and shock and ask for your patience,” Griffiths said. “Let the investigation run its course.”

No update on Barlow’s condition is available.

This is a wake up for the Tribal Council needs to hire a full police force to handle problems on their land. They have a Casino and 2 gas stations making quite a bit of money, yet they cant hire a police presence? Bishop PD, Inyo Sheriff or California Highway… Read more »

Gotta agree with you on this one: the tribal budget is above $15.5M. that’s much higher than I had thought.

Kim, you sound like an idiot. You need to know your info before making such asinine comments. So I will give you the information you seem to be lacking. The Tribe does have a Tribal Police actually two as of Monday. At the time the only Tribal officer was off… Read more »

“M”, you are a huge part of the problem of incivility infecting America. Anonymously calling people racists and idiots persuades no one, gains only the approval of other haters, and ensures the downward spiral will continue.

No M, you are the racist for jumping to the conclusion without any proof whatsoever. Barlow is and always was half a bubble off. Maybe you’d like to see this list of arrests ? I’ve seen the video and it would seem he was acting irrationally as though he wanted… Read more »

M you are ignorant and unintelligent. Sit down the adults are having a discussion. Let’s see what the toxicology report says and how much meth was in his system. The behavior displayed fits the profile. Also very Greedy tribal Counsil on display here. They see the decline of the people… Read more »

EverythingIsracist, what are you on about, my comments aren’t about him not being on drugs. No where in my comments did I say that. We are all pretty sure he is on something, we all know that is not normal behavior. Duh! I don’t know what Tribal Council has to… Read more »

I attempted to state a similar comment 24 hours ago, but the “editors” couldn’t find the courage to post it.

Sami is spot on. It must have been a boring night and these deputies (I use that term loosely) wanted a little entertainment for the night and found easy prey, someone mentally ill or on drugs and a person of color. George Barlow was NEVER an IMMINENT THREAT TO THESE… Read more »

I do not know Georges’ character personally. I know he was brutalized. What I viewed was him in the ditch with and officer behind him on top of him he got up had his hands up and was tasered and he fell to the ground he was hit with a… Read more »

Well stated, Josita. I agree with your statement 100%.

It makes me wonder what this area (Inyo/Mono) has become to have this many “down” votes. I expect it In heavily Leftist counties like LA and San Francisco , but here? Or are most of these votes from fellow drug abusers, dealers or progressives. I’m really curious.

You could move elsewhere.

Bobk some trick there lumping drug dealers, drug addicts and progressives all together. If you don’t living in a county where everyone is allowed a different perspective you could always move elsewhere.

Yeah, and you could change your habits….It’s just not going to happen.

Why are my comments posted?
Do you only allow countervailing (conservative/republiakan) comments on here?

Gee, what a surprise.

I just love how they–the above-mentioned conservative “commentators”– accuse Mr. Barlow of a multitude of crimes –past and present– without a shred of evidence. Notice how they can’t spell or use the most simple diction? It’s like they’re fed a steady diet of hate radio and Fox (faux) news and… Read more »

I agree and appreciate the background information. George appeared to by mentally ill. Drugs and alcohol could explain it, particularly methamphetamine.
The officers behaved well, better they used their police dog than a gun. That was a tough arrest for the police.
George need mental treatment.

If Barlow was my son, I would have him evaluated by a specialized psychiatrist, one who treats violent behavior. He was way too violent with the officers. They needed more officers.

Glad investigating this but one thing Sheriff wont be able to add is what a known troublemaker, bully and drug abuser George is to the tribal community. Almost everyday tribal members call the Sheriff for violent disturbances, domestic violence and drug and alcohol abuse across the reservation. The majority of… Read more »

I have worked private security and dealt with violent people just like this (yes, on drugs, yes screaming “I’ll kill you!”). The difference is we were trained in de-escalation and minimum force. Two healthy officers did not need to put a man in the hospital in critical condition to safely… Read more »

You have clearly not interacted with a person on meth. It could easily take 3 people to arrest a suspect high on meth.