By the end of an amicable but long public hearing on Inyo County’s Renewable Energy General Plan Amendment, Tuesday, the Board of Supervisors passed the amendment with some revisions to the Planning Commission recommendations. 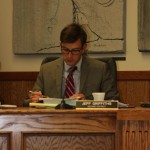 The revisions focused on pulling back some of the boundaries of proposed Solar Energy Development Areas, in the case of the Chicago Valley SEDA, removing it completely, and limiting the size and scope of future solar energy facilities by acreage rather than capacity.

As Board Chairman Matt Kingsley said at the opening of the hearing, “this is an important policy for our county. We are being watched by the state, other counties and by environmental groups…. But, this is really about our residents and our landscape. And this is where it should be decided.” The Board did their best to balance county residents and landscape with the state and federal mandates for renewable energy production.

The idea that the county was “being watched” wasn’t just rhetoric. “I asked San Bernardino (administrators) what they were doing with their renewable energy planning,” he said. “I was told they were waiting to see what we did.”

This phase of the county’s amendment is only the beginning. Phase one focused on the southeast section of the county, from Owens Lake south and east to the Nevada state line and Laws. Phase two, the Owens Valley, planning starts now.

The Supervisors veered from the Planning Commission recommendation to cap megawatt capacities based on a presentation of unintended consequences by Planning Department staffer Cathrene Richards. She pointed out that limiting commercial scale or community scale to 20 and 6 megawatts, respectively, could lead to a checkerboard of smaller projects dotted over a specific development area. Some speakers disputed that possibility, but according to Supervisor Jeff Griffiths, it is happening in San Bernardino.

During the public comment period following Richards’ presentation, many speakers agreed with removal of capacity parameters but stick with total allowable developable acreage. Community scale acreage will be limited to 36 acres.

Adjustments to SEDA boundaries achieved some of the Commission and speakers concerns. The Commission recommended removing areas designated as areas of critical environmental concern and National Conservation Lands. In essence, that’s what realigning boundaries did, with the only exception in the Owens Lake area. That specific SEDA boundary was pulled back to Hwy. 190.

The Rose Valley/Olancha SEDA was reduced to the Rose Valley SEDA, pared down to an area from Coso Junction north to a fallow 1,000 acre hay ranch, all east of U.S. Hwy. 395. The Supervisors adopted an alternative presented by Sally Miller of the Wilderness Society to eliminate the area west of Hwy. 395 to preserve connectivity for the Mojave ground squirrel.

The Laws SEDA was set-back by a quarter mile south of Rudolph Road and north of Line Street. Solar development in Charleston View will be limited to private lands with a buffer zone at the Old Spanish Highway and avoiding impacts to cultural and visual resources along the Old Spanish Trail. Groundwater pumping on SEDAs would be limited to water neutral or sustainable levels, basically no more water could be pumped than would be replaced with natural aquifer recharge.

Ryan Thomas of the Tecopa Hot Springs Conservancy told the Supervisors they were being ‘sold a bill of goods. Photovoltaic is old technology,” he said. “That’s not the way to do this. The industry is moving to individual solar sources.” The audience approved the concept of Los Angeles homes and parking lots providing energy for Southern California.

In terms of how far the County’s planning process had come, Earl Wilson noted that five years ago, ‘we were talking about 5,000 megawatts coming out of the Owens Valley.” Griffiths alluded to Wilson’s comment during the summation portion of the hearing. “They were talking about solar panels running from Owens Lake to Laws,” he said. “Look at the progress we’ve made. We’ve guided development to the least worse areas (of the county).”

Unfortunately, Inyo County’s REGPA will only apply to the 2 percent of the county that is privately owned.

We work to provide daily news to all of the Eastern Sierra, in the tradition of Eastern Sierra News Service and the Sierra Wave. We bring you daily happenings, local politics, crime, government dealings and fun stuff. Please contact us.
View all posts by News Staff →
Thinning work at Old Shady Rest
I-Main: Free Wi-Fi along Main St. Bishop