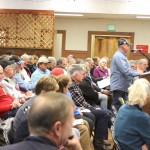 The Inyo County Board of Supervisors played to a packed house Thursday as it held a public hearing on the Adventure Trails pilot program.

What passed is a pilot program whittled down to seven routes with stringent implementation procedures. But, it passed and with unanimous support of the five supervisors. Still to come is approval by the Los Angeles Department of Water Power on four of the seven routes that cross the department’s lands. That will take three to six months. In addition, the county Public Works Department will have to establish a baseline through aerial photography and develop monitoring, signage and education programs to, hopefully, mitigate any negative impacts of what is assumed to be increased use of off-highway vehicle areas. 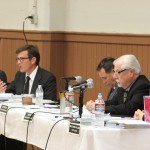 The meeting was held at the Independence Legion Hall to accommodate a standing-room-only crowd, fairly evenly divided into pro and con camps, separated, voluntarily, by a center aisle. Board Chair Matt Kingsley began the hearing by expressing his appreciation for an engaged public and asked for respect from both sides of the issue.

At the request of Dick Noles, who has wrestled the project over hurdles since 2007, the Adventure Trails project was reduced from 36 proposed routes to eight just four days prior to Thursday’s scheduled meeting. The eighth route, from Aberdeen to the Tinemaha Campground, had been changed, with an end point closer to the Aberdeen store than originally presented. The altered route, Aberdeen No. 3, will require additional environmental scrutiny before the board votes for approval, or not.

The seven approved routes are:
Bishop, Route 5, starts at Brown’s Town south of town and ends at the Poleta OHV Recreational Area;

Bishop, Route 15: starts at Laws and ends at the Poleta OHV Recreational Area;

Lone Pine, Route 1: starts at Boulder Creek and ends at Horseshoe Meadow Road.
The 17 speakers in favor of the Adventure Trails focused on the economic value of increased tourism and access for those unable to get to open lands on foot. The 26 speakers opposed to the project cited negative environmental impacts, called the California Environmental Quality Act documents flawed and urged the board not to certify the document, the first step required for the project to pass.

Following the public comment period, Supervisor Dan Totheroh posed several questions to Joe Gibson from Meridian Consultants on the adequacy of the CEQA documents his firm prepared. According to Gibson, the documents are judged on their adequacy, not their perfection and the definition of adequacy is to be judged by the voting body, or, ultimately, the courts. Supervisor Jeff Griffiths came up with a list of recommendations to strengthen the implementation procedures. Based on Griffiths’ recommendations, Supervisor Mark Tillemans made the motion to approve the CEQA documents and the motion passed unanimously. Kingsley called for a discussion of objections to the seven final routes. Receiving no objections, the motion was made to pass the routes, with the inclusion of Griffiths’ recommendations. That motion passed 5-0.

The meeting began at 10 a.m. with staff and agency reports. County Public Works’ Transportation Planner Courtney Smith dealt with the question of the 29 routes not up for approval. “These can be considered in the future,” he told the supervisors. Later in the meeting it was made clear future approval of any of the deferred routes would include the same public hearing and review process as the initial seven routes. Smith went through a list of restrictions that would accompany the program, if implemented.

According to Sheriff Bill Lutze, his department could patrol the routes with existing staff. The current OHV enforcement program budget of $426,000 was funded by “green sticker funds,” monies collected from off-roaders.

California Highway Patrol officer Brian MacKenzie, tasked with evaluating the original 70 routes, explained the procedure that prioritizes safety. The county’s Risk Manager reported that existing insurance covered any liability for Inyo. In other words, all the county’s I’s were dotted and T’s crossed.

Great Basin Qir Quality Control Board’s Jan Sudomier outlined procedures for handling dust complaints. For dust that travels out of a property owner’s borders, 240 readings an hour are taken, if 12 exceed allowed limits, it will be an Inyo County issue, Sudomier said.
Forest Service’s Marty Hornick said the routes in question were not an issue as long as the destination and roadside impacts were monitored.

During the public comment period, Mike Prather brought up a letter of concern from LADWP. “The Long Term Water Agreement and Lower Owens River Project depend on these lands,” he said. “We can’t go backwards. DWP is ahead of the county on protecting resources.”

In a Jan. 13 letter, LADWP expressed concern that, while it “was not opposed to the project,” the department needed to be protected from “resource impacts, financial damages and liability.” The letter, signed by Aqueduct Manager Jim Yannotta asked for assurances the Adventure Trails “will not affect LADWP operations, infrastructure, City land and lessees.”

To that end, attorney Greg James drafted a county ordinance identifying “malicious or unnecessary damage to land, livestock, ranching and farming operations, wildlife, wildlife habitat or vegetative resources” as a misdemeanor warranting a $500 fine and/or six months imprisonment. The ordinance would give the Sheriff’s Department authority to make arrests on public and private lands, though there was a question as to whether it applied to federal lands.

Several of those opposed to the project cited OHV manufacturers’ owners manuals stating that the vehicle is not to be operated on paved roads. The crux of the Adventure Trails program is to legalize OHV travel on public roads, enroute to established OHV trails. During the supervisors’ deliberation, Totheroh tried to pin down an explanation. James explained the manufacturers’ statement dealt with liability. “The rider assumes the risk (if he takes the vehicle on paved roads),” he said. “That’s an out for the county.” Kingsley likened it to instructions on hammers to wear protective eye wear and not hit yourself.

Griffiths introduced a list of implementation procedures that eased the supervisors into the final approval stage. He called for passage of the proposed ordinance that would put resource damage under local law enforcement’s purview. In addition, the county would develop a baseline for future assessment, include damage and user issues on the project website, develop a monitoring program and allow for temporary closures of a route. “We can re-open the routes when the issues are resolved,” he said. Those procedures will be incorporated into the final resolution.

“Differences will always be there,” Griffiths said. “This way we can go forward with a pilot program. We’ve found a sweet spot. It’s a small project. The benefits are that we can have real data” to base future decisions on.

Totheroh noted that votes that “make everybody unhappy” are usually the right ones.

In his closing remarks, Kingsley said that the project downsizing helped him make the decision to approve. “This has been a grass roots project,” he said. “I know the Center for Biological Diversity is poised and ready to shut this down. I hope they don’t. I hope they allow us to go forward. We’ve made this decision in an open discussion. I don’t know their process to decide to sue.”

If you have ever been hunting and had to hold your buddy back, because you are TEN miles back in the forest and two winey dirt bikers ride by on a barely known or used trail, you all might have some different thoughts on this here stupid subject. Ever hear… Read more »

As always the people who object the loudest understand the least about an issue. Hunters 10 miles from four wheels? Now there is something I have never seen.

Let’s see…………Ride my dirt bike with my kids and friends or kill some innocent defenseless animal just to brag about it and hang a head on the wall.

Hey you got Copper Top George, what else can ya ask for?

Why did Big Pine get nothing? Good routes. No DWP land use.

The vote of the Supes was in part to honor the work and Community effort that the folks in the Adventure Trails undertook to bring this project forward. Furthur , the vote of the Supes is intended to bring people with different viewpoints together . Part of the success or… Read more »

All that money, time, man hours, talk, meetings, travel etc and what we have is nothing. A maybe pilot program. I hoped for more but as usual I expected less.

I wanted to say thanks to the Adventure Trails planning team for narrowing the group of routes for the pilot project. I know that not everyone is happy with this outcome but I am thankful for your compromise. It will be interesting to see what we learn through monitoring. Perhaps… Read more »

This pilot iproject is intended to test how things work and to yield data for future decisions on expansion. It is layed out to avoid residential areas, where a lot of the potential conflicts are. Therefore it will not provide data that is useful for decisions about expanding into residential… Read more »

Amen… enough with the negative … Now everyone will see that absolutely nothing will change, except for a few signs… Maybe the nay-sayers should condemn the LA Times and Yelp for naming Copper Top BBQ in Big Pine the #1 Restaurant…Printing it in the paper, and putting the news all… Read more »

Cool to hear about the Copper Top. But that’s apples and oranges as far as I’m concerned. If you can’t resist the urge to call your fellow community members derogatory names, at least have the heuvos to use your real name when doing it. Personal attacks are pointless to begin… Read more »

I don’t eat BBQ. I do kiss frogs but don’t hug trout bait, yet I think it is FANTASTIC that a local business, The Copper Top, beat out all the BBQ in the country on Yelp. Awesome. I wish them many years of success in Inyo County. Super congrats to… Read more »

The Center for Biology Diversity should stick to frogs and other forms of trout bait!