The Inyo County Board of Supervisors approved the ordinance designed to make damage to resources by motorized vehicles a misdemeanor, with a $500 price tag, as written, but not without discussion on stiffening the penalties. Final approval is scheduled for the board’s April 21 meeting. 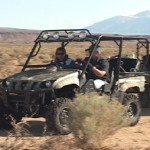 The ordinance was pivotal in the board’s approval of the Adventure Trails Pilot Program in January and the timing is critical.

Assembly Bill 628 established the pilot project that sunsets January 2017. Full implementation with signage and educational programs will eat up roughly six months, giving the county only 18 months to see the results of a compromise that reduced the initial 70-plus routes to seven.

The ordinance states “no person shall operate…a motorized vehicle…in a manner likely to cause malicious or unnecessary damage to land, livestock, ranching operations, farming operations, cultural resources, natural resources, wildlife, wildlife habitat or vegetative resources.” Violation would be punishable “either by a fine of $500, imprisonment of up to six months, or both.”

The ordinance would apply to private lands as well as Los Angeles Department of Water and Power lands in the Owens Valley. LADWP has the final say on the project whose routes provide access to city property. Federally-owned property is already protected by federal laws with fines up to $5,000.

“If we really want to send a message, we need to make the fine higher or escalating with a hefty fee for the second offense,” said Supervisor Mark Tillemans. Citing his wish to protect the program, Tillemans argued that a second offense fine of $2,500 would make a stronger statement. “We have the opportunity to really educate the public that we mean business,” he said. “We’re giving access but stay on the roads.”

Inyo County Sheriff Bill Lutze agreed that escalating fines would be effective. “A sliding scale would be appropriate,” he said. He also noted that the court could impose the cost of restoration for damage done to county lands “that could amount to tens of thousands of dollars.”

“We have a good way to start here,” said Supervisor Rick Pucci in reference to the ordinance. “There will be always be goof balls, but others may just not be sure. This is all new. (The project) will work if people let it work.” One of Pucci’s concerns was ATVs ending up on non-roads unintentionally and being hit with a stiff fine. Lutze assured him that local law enforcement agencies would be able to determine the difference between a mistake and malicious damage. Officers from federal agencies cannot write citations on county ordinances.

To cover all the bases, Supervisor Don Totheroth suggested showing LADWP the ordinance as written. “If they insist (on stiffer fines or different wording), then we can re-do it.”

The final solution, moved by Supervisor Jeff Griffiths, was to vote to enact the existing ordinance at the April 21 meeting, but have revisions for higher and/or escalating fines prepared. The motion passed.

There is a lot of ideas about how to transition from this consumer culture and steps we can take to get away from the “labor for income” “resource exploitation” “etc..” “etc…”, of course the narrow-minded will dismiss it with comments like “communism” or “socialism” but really its more like humanity… Read more »

In aerial photos of the town I live in,you can see the damage these ORV riders do to a landscape…..pre trail system….and that damage you can see includes BLM closed areas to motorized traffic…..private property the riders get onto…and LADWP land..God bless our Inyo County Law Enforcement,but for them to… Read more »

As I have previously posted: “Take your UTVs, ATVs, and Jeep Rubicons to Utah, Arizona, Nevada.” The citizenry and the cops are friendly to off roaders. The off road money is spent on road and trail improvements, the scenery is fabulous, and you can drive into any city or town… Read more »

Badfinger….Hopefully,your being sarcastic……sad thing is,there are some….mainly living in the Conservative midwest,that DO think that way.Sitting back with their rifle in their laps and saying they’re coming to get them and control them and their lives.Saying the first step will be the breaking down of the doors at 3 A.M.… Read more »

This is only the tip of the iceburg as Agenda21 becomes Law of the land, the Elites will have most of the population re located and confined into designated urban areas, where citizens can be easily controlled and Taxed, Fined, and Fee’d to death in their own designated “FEEMA DISTRICTS”… Read more »

Badfinger- Get ready- they are coming for your guns!

I think we should walk through Nature as softly as we can, and treat her with love and kindness as she is our own. =

It’s like the locals forgot they already had the freedom to do so… Kinda like the pins Y’all was wearing at the big meet in Independence.. how did it go? “I support outdoor access for all” ?? something like that, right? Anytime anyone wants to have a conversation about something… Read more »

This will be no good. Unless the fines can be accessed to anyone that runs over a bush. That should include people fishing and parking off road next to that great hole. Bird watchers pushing there way into a great shot of that rear bird. Horses that trample and eat… Read more »

What exactly does “in a manner likely to cause malicious or unnecessary damage to land” mean exactly? Does “land” include dirt roads? Is a violation driving down a muddy road and ruts are left behind you (aka Mud Whomping)? Is a violation doing a donut in some wide open area?… Read more »

Sean, bet my mother-in-law could answer that!

“Can this law be abused in a similar way to create revenue to pay for overtime pay for Deputies? Thus the more tickets written the more overtime can be given out. Deputies could become incentivised to write more tickets. This has been seen on BLM lands in the other parts… Read more »

Yes, doing a donut in wide open spaces definitely fits in the definition of malicious destruction. That is in fact the very mentality that caused everyone to protest the project in the first place. ATV enthusiasts are like “we aren’t a bunch of yahoos! it’s the ignorant city folks that… Read more »

there has been ZERO success at reining in the destruction done by off-roaders anywhere in the desert! even with the tough wording in this proposed law, there is only a slim chance that law officers will witness errant behavior…which is what is required in order to write a ticket. business… Read more »

Nice, now can we ride?

Trouble;Nope….not yet……Think there will be some more environmental groups lining up to stall this one for a few more months,if not years.

Nor until you finish your dinner, Trouble.