Changes made to an extensive Request for Proposal to provide Emergency Medical Services in five operating areas in Inyo County came close to assuaging concern by volunteer fire departments, but Steve Davis of the Olancha department wasn’t quite ready to hand out cigars at Tuesday’s Board of Supervisors’ meeting. 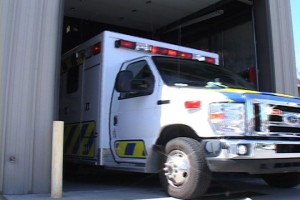 The RFP was the center of a long discussion at the Board’s June 9 meeting and was back before the board for approval. Tom Lynch, administrator of the Inland Counties Emergency Medical Agency, the entity tasked to provide support and manage EMS regulations for Inyo, Mono and San Bernardino counties’ EMS providers, presented the revised RFP, noting the changes that reflected Board and volunteer department concerns.

Some of those issues raised last month included exclusivity for providers for hospital transfers and special events, termination of a contract for convenience, requirement to pay prevailing wages and patient reporting timelines. Lynch assured the Board those concerns were reflected in the new RFP and contract language. The only immovable object was the 12-hour patient care reporting requirement. “That’s a continuity of care issue,” he explained.

“A lot of progress has been made,” said Davis, noting that ICEMA was trying to meet the requirements of a standard RFP, not necessarily a document for volunteer departments in rural communities.  “To say ‘it’s not our intent’ is all well and good,” he said. “But it’s not codified in the contract…. When you pile all the details together, they’re significant.”

Davis’ general concerns focused on the ability of a volunteer fire district to capture all available revenue and the complexity of fulfilling the contract requirements. “If we prevail,” he said, “it will be difficult. There is no deference to the fact we are all volunteers, we have no staff.”

One of those details was the requirement for annual odometer certification on EMS vehicles. With no facility in the county to certify odometers, a detail related to patient billing, annual certification would be costly. “Some of these small things are really a big deal,” acknowledged Supervisor Rick Pucci. The language of the ICEMA documents was changed to reflect alternatives, like GPS maps, phone apps or other technology, to serve the same purpose.

The termination of a contract was another point of contention, specifically the ability of the County to require the provider to turn its equipment over for use by the new provider for up to 180 days. County Council Margaret Kemp-Williams pointed out the equipment issue would only come up if the provider terminated the contract. “We will ask to use your equipment for public safety.” Kemp suggested concerns could be addressed by adding wording that the equipment would be returned to the provider in good condition or the district would be compensated.

Davis also presented issues raised in a letter from Lone Pine Volunteer Fire Department Leroy Kritz who was unable to attend the Board meeting. The Lone Pine department passed Measure D, a $100 parcel tax to support its ambulance service and now has to complete the necessary paperwork to implement that tax by Aug. 15. “Leroy’s concern is if the department doesn’t dot all the I’s and cross the T’s in the RFP the contract will be kicked back,” Davis said, raising a question about implementing the approved parcel tax.

Board Chairman Matt Kingsley asked for a motion to approve the RFP with the noted changes. “We can’t solve Leroy or his district’s issue regarding tax implementation. That’s the board’s decision. It’s them, not us.” Supervisor Mark Tillemans made the motion; the Board approved it unanimously.

“I hope the media picks up on the fact we’ve moved to reduce taxes,” Inyo County Supervisor Jeff Griffiths commented as the Board approved an ordinance that would exempt boats of less than $1,300 in value from property taxation at its July 21 meeting.

According to Tax Assessor Dave Stottlemyre, the California Revenue Taxation Board allows property assessed at $10,000 or less to be exempt if the “cost exceeds benefit.” Stottlemyre estimated the cost of assessing boats in that range or lower at $5,000 with the total revenue collected only $1,950. Approximately one fourth of the boats in the county fall in this category.

Following a public hearing where no one commented, the Board unanimously approved the resolution.

“I hope the media picks up on the fact the we moved to reduce taxes ” said county sup Griffith’s. Lol! Really? Alrighty then Griffiths. How can can you lower taxes and give salary increases across the board? This uninformed tax payer would like to know. Govts. Can only exist… Read more »