By News Staff on January 18, 2013 in Government Agencies/Utilities 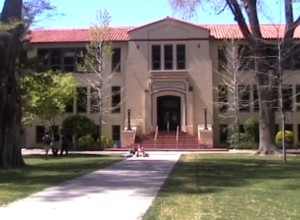 All Inyo schools were represented at the school security meeting, according to Sheriff Bill Lutze.

The bottom-line key to security and safety in our schools – vigilance. Earlier this week Inyo County Superintendent of Schools Terry McAteer held a meeting of school, law enforcement and mental health officials in the wake of the horrible shootings in Connecticut. Inyo Sheriff Bill Lutze was among law enforcement officials at the meeting.

Sheriff Lutze said his department offered to help each school with site security plans. He said it’s important for teachers to be trained as well as janitors and bus drivers. Said Lutze, “They need to be vigilant and enforce rules.”

As for the national issue of armed guards and armed teachers at schools, Sheriff Lutze said the group touched on this issue but did not really discuss it. This is something that currently will not take place in Inyo schools. Sheriff Lutze did say he thinks the best alternative, if it ever becomes necessary, would be to hire an armed security company or off-duty police officers.

As for the cost of any advanced school security, Lutze said that he sees the current situation “almost like 9-11. In the year after the event, agencies are bombarded with grants but now you can hardly get any money at all.” Lutze said the Connecticut shooting incident may be the same with initial money that dwindles. He said he would like to see one-time money to upgrade school infrastructure like camera surveillance.

The Sheriff also emphasized the importance of identifying kids who have issues – loners, bullyism and mood changes. He said this means training for teachers and staff. At this week’s meeting, Lutze said Inyo Mental Health Psychologist Gail Zwear discussed a profile of a troubled kid, how to notify authorities and how to respond. Superintendent McAteer had earlier said that a counseling program currently works with 100 local families.

In February, Sheriff Lutze said his department along with the California Emergency Management Agency will co-sponsor a class for school superintendents, principals, fire and emergency medical responders on how to deal with active shooters.

I don’t know Ferdinand, I don’t agree with hitting the kids, but do agree that there is nothing wrong with a little religeon and good parenting . But honestly, the times have changed so much that it’s almost incomparable. I think kids are much less violent these days and really… Read more »

maybe if the parents paid more attention to their children,bring them up right,perhaps a little religeon and repremanding for bad behavior,ever notice how stupid stuff started happening since parents started getting into trouble for spanking their kids?and pry them away from their violent gaming once in a while…maybe kids would… Read more »

This article brings more discussion and some contrasts in what people think is the best way to be protected from violent acts. Lets see…restrict everything, metal detectors, guards, put them everywhere. Lets ban everything remotely dangerous. Thought I heard someone in another post somewhere write..”Let Me See Your Papers Please”.… Read more »

you’re right P, where does it end, I really don’t see it ending anytime soon, unless the power jockeys just force their hand, then it won’t be pretty.

I really disagree with most of Sheriff Lutze views here. His focus is on the kids in school. It’s the young male adults outside the schools that have caused most of these shootings. A medal detector would do more to keep guns out of our schools than placing armed guards… Read more »

Dear Trouble, Sheriff Lutze was not advocating armed guards. I asked him if the subject came up. He said if schools decided to do that, they should hire
professional guards. BK

Benett- according to your article he stated armed guards or off duty officiers would be the best alternative . I think metal detectors would keep students from bringing in guns and banning all non students and non administrators from coming on campus would do more to prevent madness. Even the… Read more »

It’s sad, times have changed so drastically for us .. that we need armed guards and metal detectors in our schools, if something doesn’t change we will require the same for every place we go. Even the metal detector can be defeated id one does his home work, but it… Read more »

yeah and that’s a scary thought too … because unless we address the root problem, what would stop one of them from going off the deep end, then what will we say.