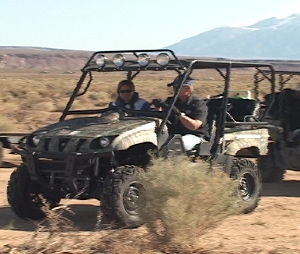 the All Terrain Vehicles are already out there now and the new pilot project would create designated areas with rules.

Dick Noles and Randy Gillespie have worked on this plan which includes special state legislation to allow off-highway motor vehicles to use a unified linkage of trails with limited access to towns. In fact, Noles and Gillespie have worked closely with each Inyo town to identify a limited number of streets to bring OHVs into communities for goods and services.

Sheriff Lutze said his department has been helping the project proponents and the town to identify routes into them. “We oversee the effectiveness,” said Lutze. “It’s a wonderful project. I believe it will be good for Inyo County.” The Sheriff said the plan will create designated places to go, whereas now it’s kind of a free for all. Sheriff Lutze said this will help with enforcement.

If the legislature okays Assembly Bill 628, a pilot project will start in Inyo. Sheriff Lute said towns can opt out of the project if they don’t want it. The Assembly Bill would authorize a pilot project in Inyo to interconnect trails designed for off-highway vehicles such as four wheelers. The trails involved currently exist so no new infrastructure would be needed. The bill goes to a committee vote in May.

We work to provide daily news to all of the Eastern Sierra, in the tradition of Eastern Sierra News Service and the Sierra Wave. We bring you daily happenings, local politics, crime, government dealings and fun stuff. Please contact us.
View all posts by News Staff →
Bureaucrat Beat: Juvenile delinquents, clueless and tinker toys
Child abuse reports to Wild Iris up 30%