By News Staff on May 28, 2018 in General Misc. Stories, Government Agencies/Utilities, Public Event

Inyo Sheriff candidates Jeff Hollowell and Josh Nicholson recently sat down for separate interviews. The general topic: the culture of the department or, more specifically, stories of heavy-handed, over-reactions on the part of deputies and what each would do to turn that perception around. 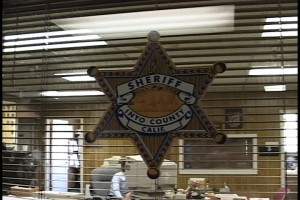 Granted, those on the receiving end of an encounter with law enforcement aren’t inclined to give the officer high praise. But there seems to be a disproportionate number of accounts focusing on the Sheriff’s Department.

Hollowell admits law enforcement in general has issues of over-reaction. “The initial training is fear-based,” he said. ‘Young deputies go into a situation tense and they can over-react. We have to teach control, help them keep a balance to stay safe but not make the situation worse…. We warn the deputies, ‘imagine what you do is on camera. Think about the jury.’”

According to Hollowell, sergeants will have ride-alongs with deputies; lieutenants go out with sergeants and on up and down the hierarchy. The purpose is to see how situations are handled. “We encourage them to look at their options,” he said. “How they could have handled a situation better. We have a young staff. We watch; tell them when they’ve handled a situation well and provide options to get better. You have to develop the instincts to size up a situation and go for the best outcome.”

Nicholson agreed in theory but not how the department actually practices. “We get paid to not react,” he said. “The young guys have to slow down. There’s no administrative reinforcement of our training. We have to refocus how we train. We need to pair up the more senior officers with the younger ones. There’s no coaching now.”

If there are more grumblings aimed at the Sheriff’s Department, more of them come from the reservations. So, how would the candidates handle that negative perception?

Both Nicholson and Hollowell see avenues of improvement, just from different perspectives.

Nicholson cited his recent participation in a Fun Run on the Bishop Paiute Reservation. “We have to start with the youth,” he said. “Deputies need to build a rapport, break down some of the barriers.” He’d like to see the department participate in those types of events. That would be the focus of the school resource officer Nicholson intends to appoint.

As Undersheriff, Hollowell is working with the Bishop Tribal Council as part of the Law Enforcement Committee. “We’re helping them get their own police department up and running with training and certification,” he said. The committee includes representatives from the District Attorney’s office, California Highway Patrol and Bishop Police Department.

The committee is not related to on-going litigation over the arrest of a Tribal officer three years ago. Currently, Tribal officers can only handle civil issues.

The “elephant in the room,” so to speak is Nicholson’s demotion from corporal back to deputy. Nicholson was promoted in August 2014 to corporal. “The position comes with a one-year probationary period,” he said. “In June of 2015 I was notified by a lieutenant that I wasn’t getting the promotion. No explanation was given.” Technically, it wasn’t a demotion, but a withdrawal of a promotion.

Nicholson points to the “good old boy” politics in the department. “There’s no consistency,” he said. “Policies and procedures aren’t evenly distributed.”

Nicholson and two other deputies were involved in a complaint of harassment and misconduct originating from an incident last summer, backed up by an audio recording. The complainant received notification, just recently, the issue had been investigated and action taken.

With the Sheriff’s race escalating into a war of campaign signs, both in size and number, as well as an inflammatory posting by “John Smith” on a community website calling out a number of Sheriff Department personnel, presumably part of the “good old boy” network, how will the eventual Sheriff deal with the divide.

Hollowell’s solution is team building. “We’ll need to get the air cleared,” he said. “I don’t care who the staff supported. We have a job that has to be done properly.”

Nicholson would take the same approach. “I’ll sit down with administration and the deputies, one-on-one, to bridge the gap,” he said. “Day one, we’ll start fresh.”

It is truly a shame that law enforcement has come under the cloud of suspicion that appears to have infected the public’s perception of “all things” government somehow being suspicious, untrustworthy, or simply bad. Sadly, it only takes a few “bad” apples or simply a few cops that showed poor… Read more »

Since before Dorsey there has been a Good Old Boy problem in the department and it is not getting any better.
We have dialed 911 when threatened by cops. It works. Don’t be a victim.