By News Staff on May 2, 2018 in Government Agencies/Utilities, Law Enforcement

Inyo County voters have a choice between the continuation of the current level of service with some reorganization to provide more coverage in South County or a new vision because the “good old boy” system isn’t working. 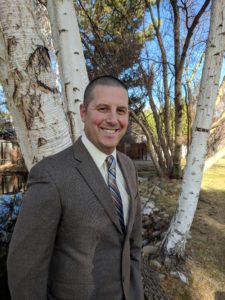 That was the picture presented by Undersheriff Jeff Hollowell and Deputy Josh Nicholson, respectively, as they faced off at the Independence Civic Club’s voter education forum Monday evening.

With the retirement of Sheriff Bill Lutze, Hollowell’s candidacy was a given; Nicholson was a surprise.

Here are the highlights of the forum:

Hollowell is a Bishop native with 30 years working his way up through Inyo’s Sheriff’s Department. As Undersheriff for the last four years, he has run the day-to-day operations.

Nicholson graduated from Bishop High in 2000, joined the Army with two deployments in the Middle East, earned his Bachelors in criminal justice, his Masters in public administration, signed up with the California National Guard and deployed to Kosovo. 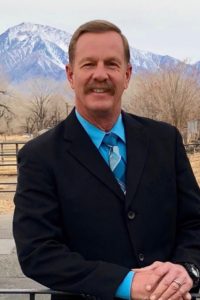 Hollowell sees untreated mental health as one of the primary challenge for law enforcement. He’s currently working with the County’s Behavioral Health Department to establish a relationship with a facility in Ridgecrest to help deal with those issues. Other challenges include prescription opioids and changes in legislation that put more pressure on department.

Nicholson points to the loss of personnel in the last two years due to a lack of leadership. He feels the department hasn’t adapted to new laws and propositions.

On budgetary issues, Hollowell has experience developing budgets for the department for the last seven years. Nicholson hasn’t overseen budget but as a Bishop Unified School District board member understands the discipline necessary in the process.

Both agreed 12-hour shifts, rather than the current 10-hours, would provide better coverage. Both agreed the reduction of drug possession to a misdemeanor was an issue. Hollowell said the department needed to stay on top of drug offenses; Nicholson would assign an investigator to work on the problem. “You have to be creative,” he said, “and help youth make the right choices.”

Nicholson would appoint a school resource officer to serve the whole County and begin building relationships, noting something was better than nothing. Hollowell has discussed potential funding sources for the position with Barry Simpson, running uncontested for the position of County Superintendent of Schools.

In his closing statement, Hollowell explained the sheriff’s job wasn’t one you could learn on the job. Nicholson said the choice for voters was easy—either a positive change and vision or the good old boy status quo.

I feel that a change is well worth the gamble. Hollowell is old school and not very productive as he has shown in the past 4 years as under sheriff
I think its time for Change and Nicholson seems to have all the credentials.

Hollowell and Nicholson agree that a 12 hour shift is a positive and possibly necessary move. However, Hollowell has had 7 years to make this change and has never bothered. Only now that he feels political pressure is he promising change. Sounds like if Hollowell wins the election he will… Read more »

Hollowell addressed this issue during the Independence forum and did say he supported the 12-hour shift. It’s unlikely that he would change his mind, although several studies have shown that officers working 12-hour shifts are not as alert and are not getting the amount of sleep or quality as with… Read more »

You ask me its time for change. The current format and resources made available to this rural area are not being used to their full potential. The lack of coverage made available to the entire count is a joke. Certainly its happening now under the current Sheriff, why hasn’t the… Read more »

Outlaw, just who exactly are “the good ol’ boys?” Could you enlighten the rest of us that live here? It seems that “old saw” is always brought out as an argument when the person making the statement has no facts or names to back it up. How about some “names”… Read more »

Interesting. Hollowell has the local experience, however Nicholson has world experience. Tough choice, but it may be time for a change. I know that on a few occasions that I’ve had to call the Sheriff either the Highway Patrol or Bishop PD (outside City limits) has responded. There seems to… Read more »

Either way I think both will be good candidates seems like both want to make change so whoever gets elected I hope they follow through with the plan. Good luck to Hollowell and Nicholson!