By News Staff on December 17, 2015 in Government Agencies/Utilities

On December 15th the Inyo County Sheriff’s Office received notification of a deceased 18-year-old female at Outpost Camp, which is a stopping point on the route to Mt. Whitney. 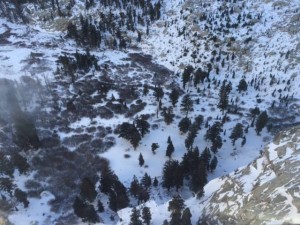 According to her father, who was both the hiking partner and reporting party, she had always wanted to hike the Mt. Whitney trail. Her father also indicated that both he and his daughter were experienced hikers, including hiking in winter conditions. They set out Monday mid-day with no intention of summitting; rather they just wanted to go as far as they could safely and return.

By early evening they reached Outpost Camp, where they decided to camp for the evening. Her father indicated that the 18-year old had been experiencing a headache; when he woke up the following morning she was deceased. 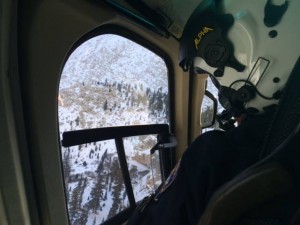 CHP helicopter (H-80 out of Apple Valley) and two Inyo County Search and Rescue members recovered the body this afternoon. The Inyo County Coroner is working with the Orange County Coroner’s office to determine cause of death.

Our deepest condolences are with the family.

We work to provide daily news to all of the Eastern Sierra, in the tradition of Eastern Sierra News Service and the Sierra Wave. We bring you daily happenings, local politics, crime, government dealings and fun stuff. Please contact us.
View all posts by News Staff →
Monkey wrench thrown at SIH ER fix
Inyo County gearing up to celebrate 150 years
2 Comments
Newest
Oldest Most Voted
Inline Feedbacks
View all comments

Prayers to all. I have taken on Mt Whitney 18 times, Summitting 8, and every climb is a different journey. I would be honored to attend services. Someone please let me know. Rockwell
[email protected]

I AS A FATHER CANNOT EVEN IMAGINE HOW HURT THAT FATHER MUST FEEL.MY PRAYERS GO OUT TO THE HOLE FAMILY.AND A SPECIAL PRAYER FOR YOU DAD.