The Inyo National Forest, through National Historic Preservation Act (NHPA) funding, has developed a series of posters that celebrate achievements of the forest’s heritage program over the past 50 years. This collaborative effort celebrates the unique local historic and archeological resources of the Eastern Sierra. 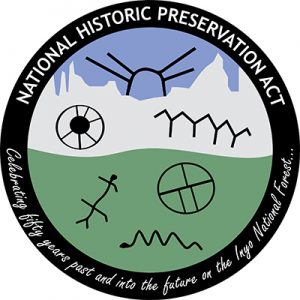 A sample of these posters will be on display at the Eastern Sierra History Conference in Bishop at the Tri-County Fairgrounds October 28-30.

“The Inyo National Forest, while often noted for its natural beauty, has a rich history as well,” said Ed Armenta, Forest Supervisor.  “The people and their relationship with these rugged lands is part of the story of the Inyo National Forest that must be preserved for future generations.”
President Lyndon Johnson signed the National Historic Preservation Act (NHPA) into law on October 15, 1966 after the destruction of numerous buildings and sites in the years following World War II. The NHPA preserves our nation’s cultural and historic resources through:

The mission of the U.S. Forest Service, part of the U.S. Department of Agriculture, is to sustain the health, diversity and productivity of the nation’s forests and grasslands to meet the needs of present and future generations. The agency manages 193 million acres of public land, provides assistance to state and private landowners, and maintains the largest forestry research organization in the world. Public lands the Forest Service manages contribute more than $13 billion to the economy each year through visitor spending alone. Those same lands provide 20 percent of the nation’s clean water supply, a value estimated at $7.2 billion per year. The agency has either a direct or indirect role in stewardship of about 80 percent of the 850 million forested acres within the U.S., of which 100 million acres are urban forests where most Americans live.