To honor fallen peace officers, killed in the line of duty, dozens of law enforcement agencies gather in Sacramento. Every year, mounted patrols also take part in the memorial services. This year, four officers from Inyo-Mono joined the ceremonies. 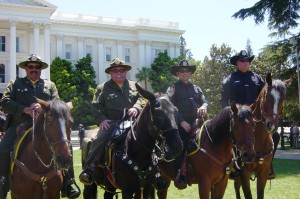 According to the Mono County Sheriff's Department, these officers took part:

This year there were 80 mounts and riders at the Sacramento ceremony. The Sacramento Police Department's Mounted Unit hosted a boarding facility for all the mounts from around California. The mounted officers were major crowd pleasers and turned up in countless photos.

We work to provide daily news to all of the Eastern Sierra, in the tradition of Eastern Sierra News Service and the Sierra Wave. We bring you daily happenings, local politics, crime, government dealings and fun stuff. Please contact us.
View all posts by News Staff →
Inyo Challenges Yucca Mt.
Bureaucrat Beat: Ocean Water, Tax Consequences, and Best Coach