California Department of Fish and Wildlife (CDFW) officers arrested a poacher last week in Inyo County for allegedly illegally killing a trophy 3×3 deer in the G-3 zone. Joseph Eugene Bragdon, 37, of Bishop was taken into custody without incident at his workplace after a $15,000 arrest warrant was issued by the Inyo County District Attorney’s Office. 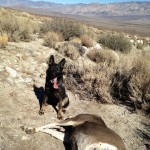 “We are grateful to the Inyo County DA’s Office for recognizing the importance of resource protection and that wildlife poaching is a serious crime,” said Lt. Bill Dailey of CDFW’s Law Enforcement Division. “Ethical hunters prize the G-3 tag for the incredible landscape and quantity of large deer. With only 35 tags issued every year, hunters can apply for years and never draw this zone.”

CDFW wildlife officers received a tip, through the CalTIP hotline, that on Nov. 1 Bragdon took his juvenile son to Division Creek in the trophy G-3 hunting zone and killed a large mule deer buck using a D-7 deer zone tag. With the assistance of the investigating warden’s tracking dog, Sieger, they located a dead deer with only the antlers and part of the edible meat removed. Most of the animal was left to waste.

Poaching a deer, cutting the head off and wasting edible meat is illegal and an egregious violation of ethical hunting standards. Wildlife officers took DNA samples and seized ballistic evidence.

The G-3 deer season runs only from Dec. 6-21. This area is considered a trophy deer hunt when high country mule deer bucks enter the area to escape the high country winter storms.

In November 2012, Bragdon was convicted of two misdemeanor hunting violations in Nevada, including hunting big game in a closed season and hunting big game without a tag. He was fined and had demerit points added to his Nevada hunting license.

Bragdon faces possible charges for several violations of the Fish and Game Code, including taking a deer without a license, tag or permit, failure to fill out tags, waste of game, failure to have a tag in possession and possession of less than an ounce of marijuana. If convicted, Bragdon could face revocation of his hunting license, fines, probation and/or jail time.

CalTIP (Californians Turn In Poachers and Polluters) is a confidential secret witness program that encourages the public to provide CDFW with factual information leading to the arrest of poachers and polluters. Ethical hunters and anglers are the most common contributors to the CalTIP hotline. The toll-free hotline number is (888) 334-2258.

Tracking dog Sieger is a candidate for the next cycle of certification training for CDFW’s exceptional team of Warden K-9s.