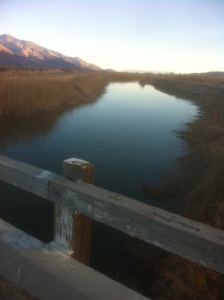 This time when Los Angeles comes to Inyo County for a meeting, citizens have real, material complaints. A school farm project has dragged on, and many mitigation measures have never happened. Plus, Inyo has a Drought Proclamation that points out dry wells in Bishop. Ranchers have also suffered a loss of water by DWP. The Standing Committee meeting was scheduled to start at 1pm today at the Supervisors’ Board Room in Independence. The County also arranged for Suddenlink Cable to televise the meeting, possibly in audio only, on Cable Channel 12.

The agenda of this meeting starts with an update on runoff and operations followed by a report on Owens Lake-area groundwater development. Item three is a report on the status of Green Book revisions. The Green Book is a document that spells out management of Department of Water and Power pumps to avoid environmental damage. Both Inyo and DWP have admitted this management plan has failed. For close to seven years, both sides have talked about a new plan that works. DWP officials have resisted management based on the depth to groundwater. So, while an agreement was signed 17 years ago for groundwater management, it’s still not done and drags on.

The group may take action on a mitigation measure that would give water to a Lone Pine School farm project. That plan has been hanging fire for sixteen years. Next on the agenda is a report on the status of the Technical Group evaluation of mitigation project water use and water supply. The group will consider an update on the disputed Blackrock 94 parcel, and finally the Standing Committee will talk about Inyo County’s proclamation of a Local Drought Emergency.

The Leadership of the Los Angeles Department of Water and Power’s Water Operations and Management came to Independence this past Friday. James McDaniel, Marty Adams and Jim Yannotta along with two LADWP Water Commissioners, Mr. Fleming and Ms. Noonan and LA City Council Member Tom LaBonge were unable initially to… Read more »