UPDATE: The Standing Committee meeting for Friday was canceled because Inyo officials decided they had posted the agenda outside the rules of the Brown Act. Inyo Water Director Bob Harrington said they posted the agenda an hour or so too late to meet the 72-hour requirement in the Brown Act. He called it an “internal decision” arrived at sometime Thursday evening. Asked if this move were in response to outside criticism that the Standing Committee has failed to live up to the Brown Act, Harrington said, no. “We’ve always attempted to, and I believe we have, been Brown Act compliant.” Harrington said a new date will be chosen soon. The Technical Group meeting scheduled for Friday afternoon at 3:30pm at the Supervisors boardroom in Independence was still scheduled to go forward.

Friday Inyo and Los Angeles officials will meet as the Standing Committee under the Long Term Water Agreement. With one vote for each side, the dynamic of the group is slow to none. The meeting will take place at the Supervisors board room 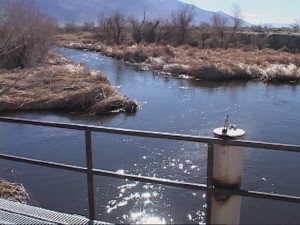 On the agenda for action – adoption of protocols for the Standing Committee. This is some 20 years after they started to meet. The group has another action item – setting the seasonal habitat flow for the Lower Owens River. Other river items show up on the agenda, and so does a report on what’s called Green Book revision.

Officials named the document on groundwater pumping controls the Green Book. It’s part of the Water Agreement, and both Inyo and LA agree that the system does not work to protect the Owens Valley from groundwater pumping. So, Inyo and DWP staff have met privately for possibly as long as seven years to come up with a better way to manage pumps. Inyo likes a method that uses depth to groundwater or groundwater levels. Seems logical, but DWP has not agreed to that principle.

The Standing Committee will talk about the Owens Dry Lake groundwater evaluation. DWP wants to pump groundwater to use on the lake bed for dust control. Inyo officials want some clarity on whether LA agrees that the Water Agreement applies to pumping on the dry lake bed. Water Director Bob Harrington reported to the Supervisors this week that there is an agreement from 1998 that says LA does believe the Water Agreement covers the Owens Dry Lake. Inyo will seek clarification from LA on Friday.

That Standing Committee meeting starts at 1pm in the Supervisors board room in Independence.

We work to provide daily news to all of the Eastern Sierra, in the tradition of Eastern Sierra News Service and the Sierra Wave. We bring you daily happenings, local politics, crime, government dealings and fun stuff. Please contact us.
View all posts by News Staff →
Flawed agreement and tule idea
Inyo recommends lower pumping than LADWP plan