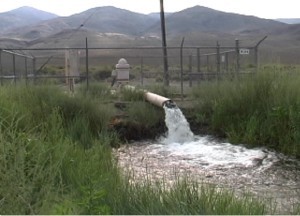 A testimony to how far apart Los Angeles and the Owens Valley stand on groundwater pumping damage is the fact that even after officials signed an agreement almost 20 years ago, they still do not agree on a method to manage pumps.

When the Inyo-LA Standing Committee met last week, they heard from staff that both sides have made progress on a method of groundwater pump management that is based on water tables. While that may seem elementary, the Long Term Water Agreement uses soil moisture and plant conditions to decide when to turn pumps off and on not the actual condition of the water tables.

The Water Agreement is the settlement of Inyo’s Environmental Quality Act lawsuit against DWP’s pumps back in the 70s. Even then, LADWP never admitted lowered water tables did damage. Inyo Water Director Bob Harrington said both sides have made progress toward methods and tools.

This spring, Inyo County gave in to LADWP’s pumping plans even though Harrington said the pumping could do damage. Harrington did tell DWP that Inyo would go along with this year’s pumping plan but expected DWP to agree on an alternative pumping management plan for a trial basis in Big Pine and Taboose-Aberdeen next spring.

If DWP does not cooperate toward that end, Inyo may decide to go it alone on pumping management.

We work to provide daily news to all of the Eastern Sierra, in the tradition of Eastern Sierra News Service and the Sierra Wave. We bring you daily happenings, local politics, crime, government dealings and fun stuff. Please contact us.
View all posts by News Staff →
“Chinatown” Documentary Stars Locals
Museum Open on Holiday